British Police: We’ll Let Your Kids Be Raped By Strangers For Political Correctness, But Disobey Doctors & It’s A Manhunt!

A "major investigation" is under way to find a five-year-old boy with a brain tumour after he was taken by his parents from hospital without the blessing of doctors.

Because doctors are God! What, you think you’ll decide if he needs more painful (and maybe hopeless) treatment, or if maybe another country can perhaps do better than the NHS? Who do you think you are? What makes you think you have any rights? You’re just his parents…

I notice there’s no mention of a court order forbidding their actions in any of the reports. Is this because the police now feel able to act without one?

Update: There being sod all on TV last night, I decided to ask a few questions on Twitter. I got nothing at all to my repeated queries to the police social media accounts or media outlets Tweeting the appeals, who remained firmly in 'broadcast only' mode:

From others, I got some....surprising...answers:

Yes, folks, that's a police federation rep in 'Never mind the laws, they are irrelevant when there's a crisis at hand!' mode.

And then...there were the 'ends justify the means because there's a ickle kiddiewink involved!' people. There were a lot of these: 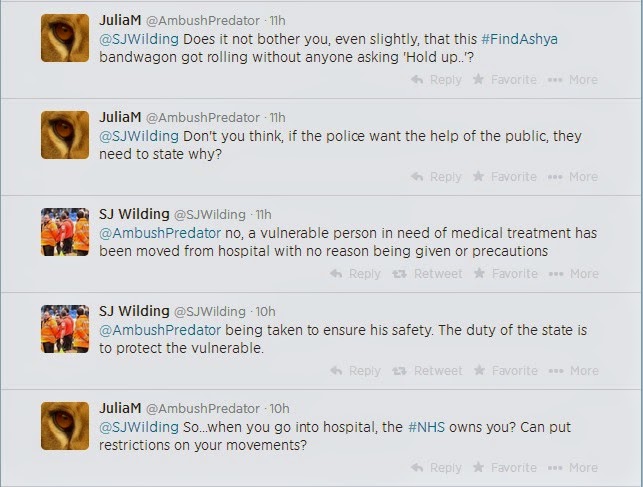 And even those who you'd think might be a bit wary of the state bypassing all legal gateways and abrogating parental rights to themselves proved less than interested because RELIGION! 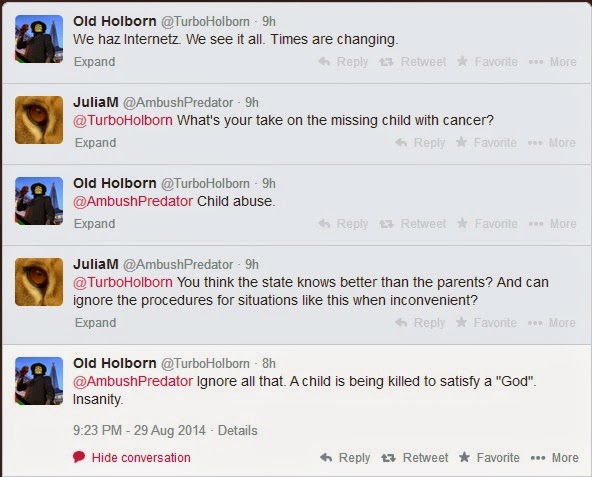 This despite the media reports being very careful to say that this wasn't thought to be a factor.

It really is a funny old world when you find the people who agree about the concerning nature of this case are people you wouldn't normally have anything in common with, isn't it?
Posted by JuliaM at 13:00

Well, apparently the kid needs constant medical care including being hooked up to a battery operated machine - and the battery runs out today.

If the family were going to take the boy to a legit hospital abroad why not just say so, even once they were over the channel?

Without being sure that the boy is going to get the care he needs then I don't think it's unreasonable to be be very concerned.

Plod federation reps will be along anytime soon to daub and vilify a very succinct heading, Julia.

It sounds like the kid had a crap quality of life, energetically prolonged by every possible medical intervention. I think the parents had every right to remove him from the clutches of science to die of natural causes, a bit sooner, nothing to do with their religion either, just love and compassion.

Anon at 13:34, it's not a case of lack of concern for the child, the issue here is the overreach by the hospital (in abrogating consent from the parents) and the police in launching a manhunt with no protection order in place.

That should concern us all.

Anon at 14:57, if that's what they plan to do, then it's of no concern of the state. Unless they have a protection order.

I'm astonished that the media aren't asking these questions.

"If the family were going to take the boy to a legit hospital abroad why not just say so, even once they were over the channel?"

If they are not acting in the child's best interest they leave themselves open to a murder charge. In the meantime the child's welfare is their responsibility.

Some years (decades really) ago I heard that once in hospital one could not discharge oneself, and was quite shocked to see patients do that in American films. Maybe the powders that be want a return to those good old days when we all kow-towed to our"betters".

There is a problem in that too many in the public sector thank that every person who lives in this country is the property of the state, body, mind and spirit. Until the system is changed so that public servants do what they are paid to do (EG in Rotherham Social Services and South Yorkshire Police) and stop finding every excuse to exceed their powers in terms of taking children away from their parents and into "care" (See Christopher Booker's articles on this problem) we will continue to have too many public servants with this attitude problem.

Will it will matter not a jot to the authorities if no law was broken when loving parents took their gravely ill son away from extensive control they had once entrusted to the NHS?

Not-so-smart plod claim to be acting in Ashya's best interests. However that claim is not supported by a brainless public boast to have triggered an Interpol search. It has precipitated global publicity which can only alarm the Kings and prejudice what care they are capable of providing.

For what it is worth, I see no evidence to suggest the parents are other than capable and loving. It may well be that new pressures applied to them will force a voluntary surrender rather than take on the extra risks of 'going underground'.

Plod and NHS are now in a win-win situation. The King's faith is a red herring used on this playing field, for there is not a shred of evidence that religion has any bearing on the 'escape'. If the plod action is based on prejudice and unsupported by lawful mandate, they will need to be more heavily reliant on speculation, rumour mongering and smearing. They are in possession of unprecedented experience in these areas. Abusive actions which make outlaws of loving parents, threaten us all and I await this particular outcome with some pessimism.

On another day, the blind pursuits of power-hungry plod will be their undoing.

The current child protection system is based on the Children Act 1989.
Four nations

The Children Act 1989 legislates for England and Wales.

The Children Act 1989 introduced and enshrined a number of principles:

a child's welfare is paramount when making any decisions about a child's upbringing, know as the "paramountcy principle" (section 1)

places a duty on local authorities and their partners (including the police, health service providers and the youth justice system) to co-operate in promoting the wellbeing of children and young people and to make arrangements to safeguard and promote the welfare of children

Correct as of July 2012
Summary

Those with parental responsibility are conferred with the rights and responsibilities for the upbringing and care provided to a child until he achieves the age of majority. These rights exist in order to allow those with parental responsibility to exercise their duty of care towards their child. This is a dynamic process, and as the child becomes competent to make more decisions for himself, the extent of the parents’ rights to act on his behalf diminishes.


Parental responsibility includes the right to refuse and consent to treatment. This does not, however, compel the doctor to uphold the parents’ wishes if he believes they are contrary to the child’s best interests. If the matter cannot be resolved by discussion and mutual agreement, it may be necessary to seek a view from the courts. While waiting for this, you should only provide emergency treatment that is essential to preserve life or prevent serious deterioration.**

** and it is the doctors DUTY to do that, even PENDING a court order. Not forgeting " places a duty on local authorities and their partners (including the police, health service providers and the youth justice system)

Therefore EVERY one here, except the parents, are withing their rights. (The bastard is subject to a pending court order, so from that point on, even without the paper work is seen as a "Ward of court."

Well, post-Rotherham, every police force will be trying so hard to show how the welfare of little chillun is their overriding concern - purely humanitarian motives, of course.

Well, because we know now, don't we?

If you DARE disobey the NHS, it's perfectly capable of hounding you with the full coercive power of the State.

Now, excuse them while they starve & dehydrate your grannie to death because she's old & useless...

"Some years (decades really) ago I heard that once in hospital one could not discharge oneself, and was quite shocked to see patients do that in American films."

Yes, you can refuse treatment. You can (in theory) refuse it for a child who's not 'Gillick capable' too.

"Not-so-smart plod claim to be acting in Ashya's best interests. "

And their own, as Ted Treen points out. 'Look, sheeple, forget Rotherham, we really do care!'

"Therefore EVERY one here, except the parents, are withing their rights."

The only real winners will be the lawyers.