The victim’s father has also criticised the lack of response from Essex Police, who informed his son that they were not able to attend immediately after the incident but that an officer would be in touch the following day.

Maybe. If they remember. It's just a knifepoint mugging, no biggie. Just part and parcel of living in a diverse city.


A spokesperson from Essex Police said: “Officers are investigating after a man was robbed in Churchill Gardens, Southend.

“The man has been described as black, had a beard, and wore a red puffed jacket with dark-coloured jogging bottoms.

“Alternatively, you can contact the Crimestoppers charity on 0800 555 111 or use the online form at Crimestoppers-uk.org.”

The online form is probably guaranteed to get as fast a response, isn't it?

But what was stolen, anyway?


The teenager was grabbed from behind by the throat and threatened, before being forced to hand over his driving licence, money, bus pass and phone, which the attacker then shattered by stamping on.

Hmmm. Not the latest model? Even the muggers are discerning these days.

Or is there another explanation..? 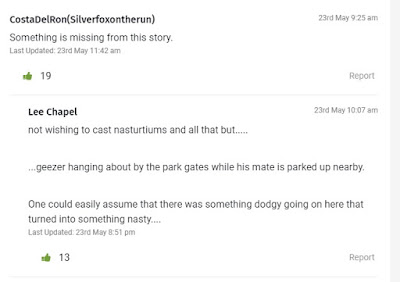