I Always Thought That Old Joke About The 'Guardian' Reader Was Just That, A Joke...

...you know, the one that goes: "A 'Guardian' reader comes across a man lying bleeding in the street, and says 'Quick, get some help...for the people who were driven to do this!'."

Well, turns out, it's real: 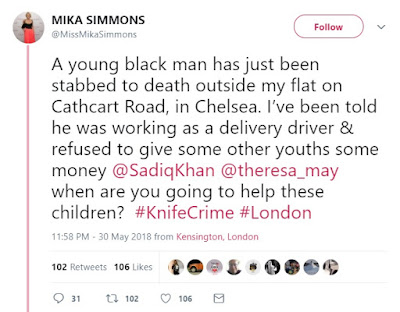 Yes, that's a minor BBC 'celebrity' demanding that the PM & Mayor of London help the people (and I use that term loosely) that have just killed someone for pocket change.

Not another youth, either, he's been identified as a 42 year old man with three children:


One resident, Victor Gambe, 54, said: 'This used to be a quiet road, but in recent years more and more young people are hanging out on the estate, smoking, and a lot of them are not local, they come from other places.' 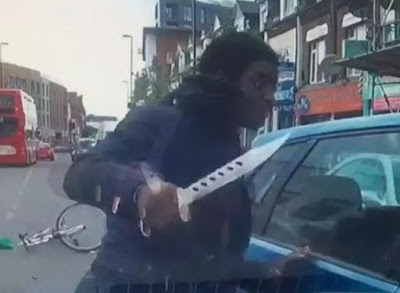 "Please give generously to help these children..."

London Mayor Sadiq Khan said: 'I was deeply saddened to learn of the fatal stabbing of a man in Kensington last night and my thoughts are with his friends and family. 'The police are doing everything in their power to bring those responsible to justice. If you carry a knife, be prepared to face the full force of the law. '

Yeah, they must be terrified: 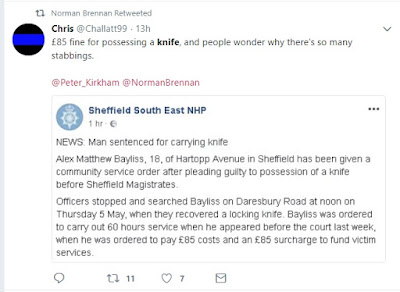 Maybe if celebutards like Mika started Tweeting about the ludicrous penalties handed out by the criminal justice system her followers might learn something?
Posted by JuliaM at 11:00

We had a cartoon in the custody suite of one of my previous stations. The first scene was a yob robbing another in the street watched by a smartly-dressed man in a suit carrying a briefcase. Second panel and the yob runs off being chased by the smart man. Third panel, the yob is caught by the smart man who hands him a card. He says "I'm a defence lawyer, give me a call if you get arrested". It wasn't popular with the ambulance chasers.

The reason these scum strut around so brazenly Melvin is partly because lefty-liberal scum like you undermine our powers at every turn. They think they're untouchable.

Police diminish and enfeeble themselves, WC Jaded. You are thoroughly deserving of the sobriquets 'filth' and 'plodscum'.

That'll be a good telling off, a pretend community service order, and the court's sympathy then.

"It wasn't popular with the ambulance chasers.
"

"That'll be a good telling off, a pretend community service order, and the court's sympathy then."

And hence, you cannot move in London without tripping over 'Crime Scene: Keep Out' tape...