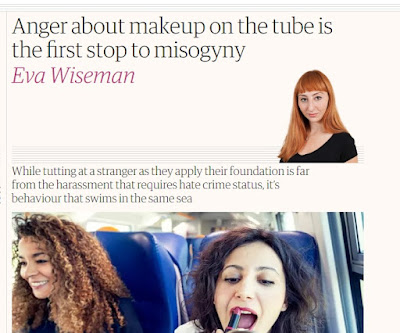 It’s always baffled me, the idea that somebody applying powder on the train has the potential to upset – I often have to clench my fists to avoid applauding the marvellous contouring work I see underground at 9am – and I still don’t quite believe it. Instead, I’m inclined to think there’s something darker at play...

Well, of course you do. You only have a hammer, why wouldn't you see only nails?


This week, my favourite MP, Stella Creasy, persuaded the government to fund a review by the Law Commission into hate crimes – it’s the first time misogyny has been recognised as a form of hate requiring a legislative framework to address. And while the public transport issue she was talking about was harassment, such as taking photos up a person’s skirt, I feel there’s a thread between the two, a fine rope of disdain for women.

Newsflash, love: I don't want to see a man putting on makeup on the Tube either!


...on my way to a meeting in town last week, I bought a jambon beurre from Pret a Manger, the most elegant of its offerings I’d argue, and indeed have, many times. It was around 2pm I think, and waiting on the train platform I propped myself against a wall and prepared to unwrap it. I was feeling slightly light-headed at this point, my body being one of those that requires a relentless routine of watering and refuelling, and while it’s not my regular choice of lunch spot, I needed to eat. I had the sandwich about an inch from my mouth when I was filled suddenly with a chalky kind of doom. I’d remembered the Facebook group Women Who Eat on Tubes, full of creep shots of unsuspecting women with their own frantic lunches, and then gently returned it to my bag.

"It’s always baffled me, the idea that somebody applying powder on the train has the potential to upset ..."

It's always baffled me that women feeling the need to apply such accoutrements in the first place isn't treated as misogyny in the more... enlightened parts of society, since men aren't required to 'have the same feelings of inadequacy' that apparently requires said women to wear war-paint.

Except the self-identified men who feel the need to wear makeup of course, but that's a #GenerationSnowflake thing.

full of creep shots of unsuspecting women with their own frantic lunches,

'Jambon' is like foreign for 'Am, right darlin? That funny foreign muck all them Frenchies eat? OK, seriously, she probably has a point...a woman eating A MURDERED PIGGY sandwich in public...in London with its hordes of Vegans?! Talk abaht taking yer life in yer 'ands. I forsee 'Meat Shaming' becoming the next twitter thing.

"I bought a jambon beurre"

It seems to me that in Wiseman's case being deprived of her "right" to apply makeup on the train because she is a lazy sow is a long way from being the biggest of her problems; a lack of intelligence and self awareness can't be fixed by applying foundation though...

Is making misogyny a hate crime a hate crime? Surely transitioning xhes will feel alienated if they don't possess the tackle required. I propose an amendment, that misanthropy be declared a hate crime. It will cover all 34 genders in one fell swoop.

Update from NYC Mayor Deblasio, there are 35 genders.

Bucko: Ham Roll with side order of pretension.

This kind of stuff makes me feel as though I'm living on an alien planet. Who cares if someone puts on make up or eats a sandwich on a train? I certainly don't but apparently if I do object I am guilty of some kind of imaginary crime. Likewise, if I do want to eat a sandwich I don't really care if someone has a problem about it. FFS Scottie, please beam me up now.

The realisation that not only will they be taking a picture of you eating, but eating with all that chalky stuff on your face...

"...since men aren't required to 'have the same feelings of inadequacy' that apparently requires said women to wear war-paint."

I'm happy to say I've NEVER needed to apply it on the move - I just get up earlier!

"I forsee 'Meat Shaming' becoming the next twitter thing."

Oh, gawd, don't encourage them! Not that they seem to need it, mind you...

"..a long way from being the biggest of her problems..."

Well, quite! And yet being thick as mince seems no longer to be a bar to a career in the meejah!

"Update from NYC Mayor Deblasio, there are 35 genders."

And they all seem to have been on display at the Kavanaugh hearing!

" I don't know why they even bother with formalities like driving tests."

I'm pretty sure a large percentage of those I meet locally on the roads have never sat one.