The Problem Is Parenting, Not Gaming

Errr, hang on! Surely 'Fortnite' hasn't been out for two years, has it? 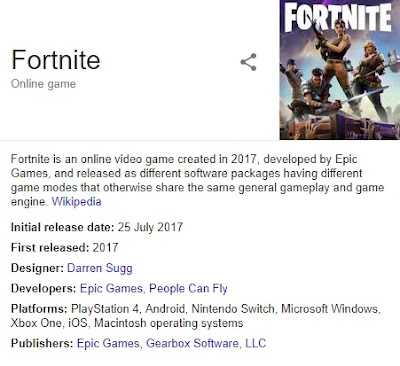 Didn't think so! But obviously a popular 'hook' was needed for the story. Such is modern journalism...


Britta Hodge, from Sydney, said her teenage son Logan was once an adventurous boy who enjoyed playing sports, going to the movies and beach, and hanging out with his friends.

But his debilitating addiction to video games, including Fortnite, has become so severe, he hasn't attended school for two years - and he only comes out of his bedroom when he needs to eat or use the bathroom.

Surely you just take the wifi away and say, "Oh well, bad luck, you haven't got the internet!"


'It's not as simple as taking the cord away and going, "Oh well, bad luck, you haven't got the internet",' she explained.

Hmmm, really? It would have been if I'd tried this as a teenager!


'Because the repercussions from that – angry, aggressive – we've had to call the police... I have been head-butted, I've had concussions.'

As the mother shared her harrowing story, reporter Tara Brown said: 'It sounds like you're frightened of him,' to which she nodded her head up and down.

Why isn't he behind bars?


Experts have warned how the popularity of Fortnite has turned into a concerning obsession, with many psychologists finding their patients who are 'obsessed' with the game even becoming violent when their parents intervene.

Then lock them up. Violence is violence. The cause shouldn't matter.
Posted by JuliaM at 10:30