Irony, Thy Name Is ‘Guardian’…

Social media has given extremists a new tool with which to recruit and radicalise. It is something we are frighteningly unequipped to deal with. Worryingly, it is on Facebook, which most of us in Britain use, where people are being exposed to extremist material. Instead of small meetings in pubs or obscure websites in the darkest corners of the internet, our favourite social media site is increasingly where hate is cultivated.


While in the real world, alternative views would be challenged by voices of decency in the classroom, staffroom, or around the dining-room table, there are no societal norms in the dark crevices of the online world.

This must not stand! How can anyone advance ideas and concepts that are allowed to stand unchallenged?

What are they afraid of? If their views are correct, they'll stand up to scrutiny and challenge, won't they?


There are many examples of groups that feature anti-Muslim or antisemitic content daily, in an environment which, because critics are removed from the groups, normalises these hateful views. If you see racist images, videos and articles in your feed but not the opposing argument, you might begin to think those views are acceptable and even correct.

Absolutely, Lucy! I look forward to commenting on your arti.... 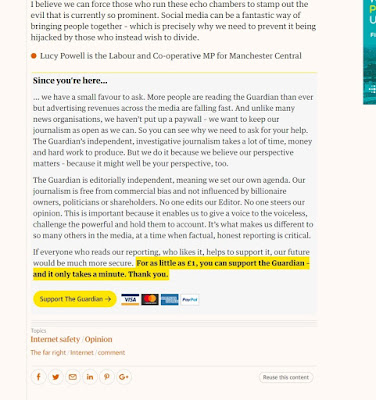 No comments allowed..? But...but that's not the way forward, Lucy!

Her views are already correct and so are not in need of challenging.

And thus will she go to her grave believing herself to be right. While the world moves on around her, oblivious.