In Colorado stands a mountain called Cheyenne. The dark crag juts out of a high plateau in the shadow of Pike’s Peak, where the Rockies break off abruptly into the endlessly flat expanse of the Great Plains.

In the late nineteenth century a schoolteacher and minor poet named Katherine Lee Bates travelled to the fourteen-thousand foot summit of Pike’s Peak, gazing out across the incredible array of jagged crests and down across Cheyenne Mountain and the plateau into the bountiful plains. Her poet’s eye saw purple-mountained majesties stretching endlessly in one direction, fruited plains reaching forever in the other. Her vision absorbed it all and more, seeing the manifest destiny of a young nation stretching from sea to shining sea. To Katherine Bates it was everything that made her America great, made her America The Beautiful, and so she wrote it.

Others came later and saw more. In the middle of the twentieth century, when America was at its most powerful and most afraid, others saw the Rockies the way the French saw the Maginot Line – as an impenetrable fortress. They were equally patriotic if less poetic than Katherine Bates. So thet dug deeply into the bowels of Cheyenne Mountain, hollowed out her granite innards, and lived there. They stayed for decades, watching and waiting.


I can’t recall where I first picked this book up, or why. Perhaps it was the cover? 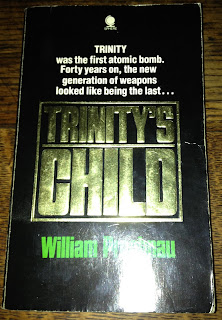 I was a great fan of airshows and went to many, from Fairford to Alconbury via Mildenhall, so it’s possible I picked it up at one of those.

It's definitely a book NickM from 'Counting Cats..' would adore, based as it is firmly in Tom Clancy-esque military 'end of the world' scenarios.

And yet that's a mere backdrop for the far more human dramas and decisions made by the crew of Polar Bear One and those who come into contact with them on their lonely flight.

It was made into a TV movie with Powers Boothe and Rebecca De Mornay, with the late Martin Landau as the President. Not a bad adaptation  either, even back then, HBO was showing itself as a force to be reckoned with, but I can't help but speculate what a modern adaptation, with modern CGI, would look like.

And then I remember - the Russians aren't the bad guys any more, are they?
Posted by JuliaM at 13:30

Powers Booth and Rabecca DeMournay?
Was that, "By Dawns early Light"?
It's one of my favourite films but I wasn't aware it came from a book. I'll have to get myself a copy.

Of course it was. You linked to it. Duh!

I think that Martin Landau is still alive.

I think for me the best moment was when Landau asks who is left in charge and they say 'The Interior Minister' in much the same despairing, horrified tones as we would say 'Nick Clegg'...

In the late 70's I read a book called Sam 7 by the author Richard Cox. Believe it or not, I've tried for years to recall the title and its only just come to me.

Anyway, plot concerns the shooting down of an airliner by surface to air missiles over London. The story chillingly describes the crash upon Victoria Station and the after-effects. Remarkably, given the current climate, it's probably one of the best examples of life-imitating-art that I can think of.

;) The book is well worth reading.

"I think that Martin Landau is still alive."

Indeed he is! It seems I fell for a hoax a few months ago. I think it got printed in a few newspapers too.

"...in much the same despairing, horrified tones as we would say 'Nick Clegg'..."

Oh,me too! I often think of it when I see a really low airliner over London, too...

The followup was crap though "Joe 90".

The followup was crap though "Joe 90"