…but until then, I guess 'anti-vice patrollers' might help!


A member of a group set up to rid city streets of kerb crawlers has been caught slapping a prostitute.


CCTV captured Jordan Tudge assaulting the woman in a takeaway in Normanton.

The footage showed the 24-year-old go into the premises in Normanton Road, approach her and strike her face once before walking out.

Yes, indeed. He sought her out. She wasn’t even soliciting at the time, she was simply shopping.


Maggie Orton, for Tudge, said her client was part of the anti-prostitute patrol set up in the summer, adding: "They wanted to try and keep the streets of Normanton clear of crime and Mr Tudge was even pictured on the front page of the Derby Telegraph as part of that group.

"They wanted to keep the streets clear of prostitutes and drugs and were met by behaviour such as people urinating in the street.

"He feels he has compromised his position as one of the leaders of that group by his actions and he expresses his desire to apologise."

Nicely worded. I’m expressing my desire to have him horsewhipped right now, but you’ll notice he remains unharmed. Sadly.

What's that? You want to see what this He Man looks like? Well, here we are (he's cleverly avoiding Farenheit211's 'Beardred Savage Of The Day' award by ...well...): 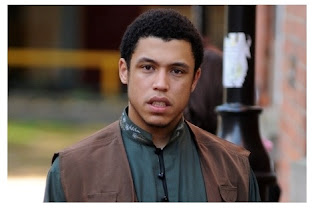 James McNamara, prosecuting, said the woman had entered the takeaway with two other prostitutes to buy ice cream and milk shakes when Tudge walked in.

Mr McNamara said: "He approaches her and says words to the effect of 'why do you come here? You don't have permission to be here'.

"She turns to ask him a question and he replied along the lines of 'don't ask me nothing' before slapping her face and walking back out on to the street."

I didn't realise you needed ‘permission’ from some gormless-looking street thug to buy icecream. No matter what your profession…

Say… could there be an elephant in this room, perchance?

Why bother? What are you waiting for?


Outside the court, Tudge apologised for his actions.

He said: "It was only a little tap to the face, the kind you would give to a naughty kid, but that doesn't excuse what I did and I am sorry.

"I should have remained calm and composed but I lost my self-control. "There was an air of tension at the time as earlier I had been threatened by a group of men who I approached who I believed had come to the area looking for prostitutes.

"The prostitutes in the street were also being brazen in their behaviour looking for business but, again, that does not excuse what I did."

Yup, I can see the tusks, the grey trunk, the wrinkled skin, all we are missing is the big ears.

Ah! Here they are!


Uthman Ali, leader of the anti-prostitute patrols, said: "At the time of the incident Jordan was not on patrol.

"We have now stopped doing the patrols, which we think worked very well."

You didn't get to stone anyone, though. Never mind. I'm sure you think your time’s coming…

Oh, and as for young Master Tudge, it seems he wasn't even keeping his own area clean of the streetwalker menace - he travelled all the way from Sinfin where he lives, a good hour to walk, to ‘keep the streets safe’ in Normanton.

Don’t they have prostitutes in Sinfin? Or are they just all bigger than him there?

But then, Googling the name, it seems Tudge is quite the travellin' man. Here he is in Derby helping to rid the streets of the 'menace' of gay rights protesters. He must take a lot of annual leave from his no doubt well-paying job to be able to attend all these protests, eh?

You'd think he'd have enough family matters to keep him at home, wouldn't you?
Posted by JuliaM at 12:05

Thanks for drawing attention to this, Julia. Laban has also written about these vigilante groups (in Islamic terms they are pursuing what is called 'hisbah' or al-amr bil-ma'aroof wa al-nahy 'an al-munkar, that is commanding right and forbidding wrong) in Bradford some time ago. Groups such as these have formed wherever fundamentalist Islam has been espoused. There is a clear ideological linkage between the formal religious police of Saudi Arabia, the Mutawwi'een or 'people of obedience/compliance' and groups often calling themselves 'committees' or 'movements' for 'the promotion of virtue and prohibition of vice' which spring up everywhere that Wahhabi Islam is growing in influence. I'd wager that there are groups like this all over Europe - often fairly small and unrepresentative - but doing their bit for Islam. It's win-win for the bearded nutters because they are assured of a softly softly approach from police and local govt., simpering reports in local press who don't question too deeply about motives or tactics, and a good way of attracting recruits. Plus, they'll even attract qualified support from the hang 'em and flog 'em brigade amongst natives. Eliminating prostitution is just a pretext though for getting beardies out on the street. Other activities will follow.

Also note that Tudge (you can bet his dad was never around; statistics for the corrolation between the 90's chav-birth name Jordan, single parenthood and criminality would be interesting) is wearing the preferred Paki/Afghani attire of collarless khamees and waistcoat, which has nothing to do with Islam, but when worn by converts signals their desire to fit in. I'd be willing to guess that he's had identity problems growing up in Derby given his mixed race heritage.

The top rated comment under the article is instructive

“Vigilante style posses are never a good idea and this is why.It creates a platform for people to air and exercise thier own personal beliefs. This boy hails from sinfin so why isn't he ' cleaning' up the streets in his own neighbourhood ?. I was once ' cleaned' up by a vigilante group on Normanton road some years ago. I was not working as a prositute I was a student with great legs and a dress to match them, on my way home from a night out. The treatment I received was brutal, rude and left me in no doubt as to the purpose of the group. Remove white women,any white women from the streets because we're all prostitutes or have the potiental to be. Controversial perhaps but it happened.”

Anon, you are approaching the truth of the matter on this one.

Re the beard, he's still a bearded savage to me facial hair or no facial hair.

If such a creature wishes to live in an Islamic state, or under the barbarity that is Islamic morality, then I believe that those who wish this should be able to give up their UK citizen ship (even if born here) and get a free one way trip to whatever Islamic shithole will take him.

Now if she'd walked into a takeaway establishment...

Let me get this straight. It's OK to rape 9 year old girls, prisoners of war and assorted kuffar, but paying a grown woman for slap and tickle is haram?

Islam is the turd on the shoe of human development.

Noggin, isn't that comparison between Islam and turds a little unfair on turds?

Noggin I have to agree with Farenheit on this one, turds can be used as fertiliser and also to provide methane energy. Turds when used properly can be an energy resource. Islam on the otherhand is pretty useless in all respects.

Google 'jenkem' for one of turd's many uses.

Mixed race jihadist versus female 'sex worker' - must have taken some time working out the Victimhood Poker hands on this one.

No wonder the Magistrate has had to adjourn to consult the Mothership.

So, is this 'patrol' approved by the police, or are they allowed to get away with terrorising people because they're muslim filth. This is just a stage to accepting sharia and should be resisted by force and physical obliteration of the jig shit patrolling. This is the only thing muslims understand as shown by innumerable cases from history.

I thought a high percentage of a prostitues clientele was from the muslim/paki community.

" There is a clear ideological linkage between the formal religious police of Saudi Arabia, the Mutawwi'een or 'people of obedience/compliance' and groups often calling themselves 'committees' or 'movements' for 'the promotion of virtue and prohibition of vice' which spring up everywhere that Wahhabi Islam is growing in influence."

Yes, I thought there was a disturbing similarity...

"Mixed race jihadist versus female 'sex worker' - must have taken some time working out the Victimhood Poker hands on this one. "

Well, it would seem they are aware of these patrols, and aren't too concerned. That was, of course, before this incident:

"Inspector Richard Keene, who is in charge of policing in the area, said: "Prostitution and the associated problems like drug use is an issue we are tackling head-on.

"Our operation is very much a partnership with local agencies and it's important that people living in the area are protected and feel reassured that something is being done to tackle their concerns."

He said police were aware that "a group of concerned local residents" had decided to walk the streets with the intention of discouraging prostitution-related offences.

And added: "We acknowledge their concerns and have no issues with their desire to patrol. Local officers keep in contact with the group throughout the night.

"We will carry on monitoring the situation and have no problems with the group patrolling, as long as they conduct themselves in a peaceful fashion.""

So, how'd that work out for you, Inspector Dick?

You are all cunts and racist bastards I hope you all die and that when you do you are burnt in hell!

Clearly these guys are using these patrols as they have noting much else to do with their time.
their so called leader Uthman clearly has issues which maybe he could resolve with the women in his own house before trying to deal with women of the streets lol