Angry David Oultram has been left without gas for more than a week – after engineers claimed they could not work in his cluttered home.

I'm not entirely sure ‘cluttered’ is the word. ‘Cluttered’ implies he has too much stuff, too many books, nick-nacks, etc. Something I'm surely guilty of...

This isn't ‘cluttered’; this is the first stage of hording: 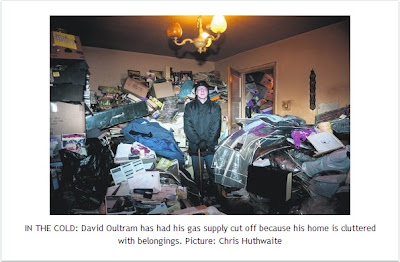 Maybe there’s a previous gas engineer under all that…

The unemployed 56-year-old believes Moorlands Housing has put his life at risk by denying him heating and hot water as temperatures dip.

I can’t see how – those layers upon layers of accumulated stuff must insulate the house pretty well!


… furious Mr Oultram, who suffers from arthritis and sciatica, believes the engineers could have worked around the clutter and should not have turned off his gas.

Mr Oultram, who lives in Wardle Crescent, said: "My mother and sister both died a couple of years ago, and they left me their belongings, and I have a lot of things in boxes and bags that have built up over the years.

"But there was enough room for them to do their work. I used to work as a painter and decorator and I sometimes had to work in a cupboard where you couldn't swing a cat.

"I think these gas engineers were just being awkward."

Well, no. No they aren't. You cannot expect anyone to work in those conditions.

And did you really expect that, having seen the pictures of your house, any reasonable person would agree with you, rather than with the gas company?
Posted by JuliaM at 09:00

Unemployed anc can't tidy the house and expects everyone to work round him, if he actually cleaned the house a bit, he would work up a sweat and some natural heat. World's tiniest violin and all that.

And Ivthough my flat was untidy...

This man appears to be on the brink of gas self-sufficiency.

The place is a health hazard...not to mention a fire hazard...not that it should be up to the authorities to decide that tho or we'd all be in trouble.

At the very least he should be obligated to clear the "work area" they need to get to and it's completely on him if the work doesn't get done.

I remember being a teenager, I had a room just like it.

Comments you are unlikely to read:

“Mr Oultram appears to have an issue with hoarding, and he needs treatment for this. Help needs to be given to him immediately.

If the Rundowne Estate Gazette can let me know where to send it, I'll send a cheque for £200 to assist.”

“If they can convince this man to let someone help move the clutter around where the workers can do their job, my weekends are free and my number is 0123 456789."

Oh, and it looks as though he needs a lightbulb, it must be hard to read in there. Looks dapper with his cane, bit difficult to do a Fred Astaire routine though.

I have been to a few houses like this in the course of my work.It's more common than you think.
The people are generally slightly mentally ill but usually very polite.They see nothing wrong in their lifestyle.I won't take a cup of tea off them though!
Feel sorry for the neighbours.

Hard to get a word in edgeways.

Ah, so you're the one who raided my student digs!

We pay our money into their bank accounts. They spend it. They do nothing else.

They want for nothing. Everything shall be provided. And when this poor guy, only 18 months out of the Gulag, has to actually do something for himself?

He goes straight to The Daily Whineograph, where other Labour voters can vent their spleen about 'the Council' not looking after this 'vulnerable' man?

Sometimes, I feel as though I am the only person left in a leper colony with no lesions. Well then, jump in the bath and make some soup for the others!

Sorry, Julia, I am getting very Roland Freisler over this. And that. And that.

Julia: Why is some worthless shithead putting spam in the comments?

I saw a brilliant documentary about a housing association a while back and they had a resident with exactly this situation. Lovely little flat in a recent development up North somewhere. He had moved there after his wife had died and had not thrown anything out since. She had run the house, you see...! The building was having its water or gas replaced and the workers could not work in his flat.

Anyway the loss of his wife etc. had made him depressed etc. it was quite moving to see the housing association staff negotiate and help him sort his life out.

"World's tiniest violin and all that."

"I won't take a cup of tea off them though!"

"He goes straight to The Daily Whineograph..."

Well, why not? They seem always keen to indulge.

"Why is some worthless shithead putting spam in the comments?"

Because Blogger's spam detection has gone haywire in the last few weeks! I'll get 'em manually.
"... it was quite moving to see the housing association staff negotiate and help him sort his life out."

You can only help those who recognise they have a problem and want help - this guy isn't there yet.