Labour party members in Rotherham protested against the decision to field an "outside" candidate in the forthcoming byelection by staging a mass walkout from the final selection meeting.

This is, of course, the Nov 29 by-election prompted by the resignation of the latest MP expenses cheat, McShane.

So, what’s their beef? Well, once again, it’s the demand that local areas accept a candidate desired by the high command:


The dissenters said they would now not canvas for the eventual nominee, Sarah Champion, chief executive of Rotherham's Bluebell Wood Children's Hospice.

Heh! It’s their ball, and if no-one plays the game without cheating, they are taking it home with them!


"If the NEC [Labour's National Executive Committee] wants to parachute in an outsider, the NEC can come up to campaign for them," said one member who walked out.

Ahhh, you were doing so well right up to that bit. If they had wanted a woman, you should have asked ‘Why?’…

The candidate is herself is just the sort of Labour Party apparatchik you’d expect from Ed’s Special Needs Team:


Putting a brave face on after the bruising meeting, she insisted had not nearly "broken" the Labour party.

"I think it's absolutely right that people want to have their voice heard," she told BBC Look North, "but no, the labour party has not been broken. Mahroof would have been a good candidate, he has got a good, long track record of working in Rotherham, but the party has made its decision."

Translation: ‘It’s right that the little provincial people feel they’ve had their little say, so long as they then knuckle down and do as they are told by us important people…’

But it seems that the locally-preferred candidate had less going for him than just the wrong set of genitalia:


One Labour insider said Hussain had been the "red hot favourite" locally but as a Muslim man was deemed too much of a risk to the party in the wake of the child sex grooming scandal involving Pakistani males in the constituency which has prompted far right protests in the constituency.

Oh, dear. The twists and turns of identity politics, eh? Tweeter Mike Broadbent disagreed that this was the whole local party: 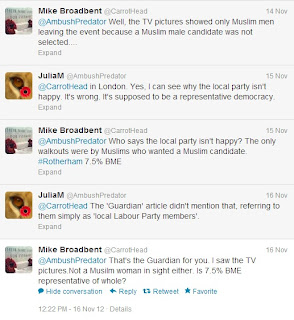 Labour was also keen to choose a woman, said the insider, because: "The Rotherham political class is male, male, male."

The South Yorkshire town has never had a female MP, and the Labour council has long been overwhelmingly male dominated.

And why is that necessarily a bad thing? Would they have been better off with, say, Margaret Moran? Or Nadine Dorries?


A Labour source who was at Tuesday's disastrous meeting confirmed the walkout. "People are entitled to their views," he said, "but we need a clean break with the past in Rotherham."

Translation: “The little people are entitled to their views, so long as they then knuckle down and do as they are told by us important people…”
Posted by JuliaM at 12:05

Although I'm not in favour of all women shortlists as I believe women are quite capable of competing equally with men. Rotherham, with its multiple 'issues' probably does need an outside candidate imposed.

It looks as though the local Bearded Savages thought that the removal of McShame would be an opportunity to get another Bearded Savage MP and therefore more power and more cash.

This may be what is behind some of the whines from the local Islamic mouthpieces. It is all about the power.

As you say, identity politics has brought us to this.

This is Rotherham... Labour will win regardless. If the system was fair and the electorate had any collective common sense Labour would be punished for a generation. But alas, even if McShane stood again, they'll no doubt be returned with a larger majority.

The lesson kiddies; get caught stealing and ride ever higher in the polls.

A word of advice for some comrades who seem to have missed what has happened in the last quarter century. Selection meetings are now, like "conference" mostly scripted, outcome known in advance, affairs. And whilst the great and good of Labour are usually happy to turn up and laud the efforts of local candidate for local people sons and daughters of the party who have striven and struggled for many years at local level, privately they much prefer "one of us" when it comes to new MPs - and one of us, no matter where they come from and how they got the nod, will always be preferred. Actually, if you haven't noticed that chances are you are still a card-carrying member of the party - so find a former comrade who isn't any more and get them to explain it to you.

John Pickworth hit it on the head. As always happens here in the People's Republic, if it waves a red flag it's in. As a colleague from Barnsley recently commented "you can't educate pork".

"...probably does need an outside candidate imposed."

It can't - surely - be that impossible to find a local one that fits the bill?

Of course, the problem then is getting the voters onside, but as John Pickworth and others point out, who else are they going to vote for!

"As a colleague from Barnsley recently commented "you can't educate pork"."

Given the suggested demographics, you soon won't have much to educate!

Julia, I'm normally the first to jump up and down promoting democracy at the lowest possible level. However, when you look at the corrupt structure of many of the Labour Party one party states in the UK, plus the sadly common problem of bearded savage entryism in places like Newham, Tower Hamlets and Rochdale etc, it starts to become apparent just how small the local pool of non corrupt and non corruptable people there are in local Labour establishments.

There was probably nobody in the local Labour party who would be a fit and proper person to act as MP.

After all this is the local labour party that kept on selecting McShame and also probably had some hand in the local authority in keeping the Islamic Street Grooming scandal quiet.

Never ever underestimate just how close Labour councils both elected members and appointed officers are to the Labour Party establishment and structure.

Although I all for local parties picking their own candidate, in Rotherham the choice probably would have been between different types of corrupt slime.

Something similar happened in South Wales a few years back. The local candidate was deselected in favour of a woman. If I recall correctly, he ran as an independent and won the seat.

These things have a habit of backfiring. Either way it's popcorn time.

"There was probably nobody in the local Labour party who would be a fit and proper person to act as MP. "

I suspect something that could be said about many of them...

"These things have a habit of backfiring. Either way it's popcorn time."