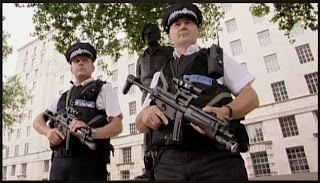 NABIS also maintains surveillance on multiple “routes” used to acquire weaponry. One is the rise in the use of so-called “antique” pistols and revolvers, some of them dating back as far as the First World War and even the American Civil War, by criminals who are finding their paths to new weapons smuggled into Britain narrowed.


...whether antique or not, many of these weapons are in the same working order as the day they were made.

Martin Parker, head of forensics at NABIS, said: “The technology in these weapons has not changed for a century or more. An antique weapon can still be lethal but it is classified as a collector’s piece with no formal requirement for it to be registered.

“The problem occurs when criminals find they can’t get new weapons from outside of the country. It would be fair to say we have seen an emerging increase in the use of these antique guns.”

Gosh, I wonder what would 'solve' that? Let me think...


One urgent priority is work by NABIS and ACPO with the Home Office to revisit the regulations surrounding “antique” guns to ensure viable handguns are prohibited or more tightly controlled.

Meanwhile back on planet Earth, This---> http://www.youtube.com/watch?v=7Va87gB_4AI

What a load of old wank! The pistols permitted are either flintlocks which are single shot, take a bit of loading, and are quite prone to failure to fire due to priming powder coming out of the pan with careless handling.
Next up is cap and ball revolvers, mid nineteenth century, six shots but fun to load, fifteen minutes is good going! What these mutts are thinking of is the Model 1873 Peacemaker, a cartridge pistol, which is already covered by the ban!
I wonder who these clowns are tooled up with their military class weapons to fight anyway? A real soldier would laugh at them, and the average punter has no access to firearma anyway (talking of illegal stuff here) so who are they dressed up for?

Now what have I got at present...

Five flintlock cavalry pistols, two Gendarmerie pistols, all from around 1800 to 1815 and a mtched set of 1800 (ish) Royal navy boarding pistols.

Am in the process of buying a full size 24 pounder 1814 horse artillery cannon.

ALL of them proofed for "live fire."

The neighbours stopped giving me funny looks as to what is parked in the garden about ten years ago.

(Of course, that can change. I buy and sell. An origional WWI field cannon would be nice, but....)

Only five kilo of black powder at present, as the season does not start until March. After that, normally about 40 to 50 kilo.

I will invite you aboard my ocean yacht when I buy it.

FT
Is this yacht of yours going to be tooled up?
If so, can we go around the coast of Somalia and show the mutts what real pirates look like?
I'll bring my own parrot.

4 minutes without hurrying, less with a ball and charge together in a fag paper "cartridge"

Plus the colt pattern had a removable cylinder, so if you had one or more pre-loaded...

And yes, I have used and fired them.

What I always dreamed I would do if I won a couple of million. Buy a couple or three Type 100 S-Boots (http://s-boot.net/sboats-km-dat-s100.html the top of the range German torpedoe boat of WWII) or the Swedish Spica class ( http://en.wikipedia.org/wiki/HSwMS_Spica_%28T121%29 ), kit them out with the latest racing engines, and then go raiding banks, Pubs, distillerys, horse breeding farms, etc in the North of Scotland, and around Ireland, that lie on the coast road. (There are MANY, in the small villages.)

Hey! If youre going to end up doing time, at LEAST do it with street cred!

4 minutes without hurrying, less with a ball and charge together in a fag paper "cartridge" XX

"Cartridge???" Powder in, ball in, press, grease. WHAT Cartridge?

The fastest at re-loading was my "Mother." She could have a cylinder ready to go before you had (accurately) fired the last one.

MANY happy an hour on a Sunday smelting lead and casting ball!

I seem to remember being able to load an Adams within the space of a cigarette...not that I would have smoked while loading a black powder weapon...and I say that as a man who won't work on a carb without a caporal hanging from his lower lip (de rigeur for mechanics of a certain era)!

I don't know the exact laws her ein the UK now but if owning an Adams is still legal then the Policey men are right to be worried. That hand gun was IMO perhaps the finest ever made, kicked Colt to the kerb and the bullet would knock Mr H&K+flak vest in the picture off his feet. At a guess I'd say the calibre of the Adams slug was up with the Desert Eagle? (FT?).

Rightwinggit & FT
Had them myself too, Colt Navy 36 Cal Model 1852, I was more thinking of starting with a pile of powder and a measure, but still, you are probably faster than me at it. You might want to remember an over powder wad too, chainfires are nasty on them.
My point was, you arent hunkering down behind a bin to reload, which is why the old time pistolmen (gunfighter being Hollywood again) used to carry up to six loaded pistols, two in saddle holsters, two in holsters on the belt, and a couple tucked in here and there. Always wanted a 44.40 myself. I just think the whole thing is more scare story bullshit from the gun fearing wussies and the other pants-shitting hysterics in charge.

NB before one of the guns nuts pulls me up: I am talking about the Adams model where one compressed (not just pressed) the ball into the chamber (supposedly allowing the gun to be even fired underwater).

Desert Eagles come in a few calibers, but the basic frame is .50, also Half an inch.

And only cock sucking, medallion wearing, Jason King wannbbes have them chromed.

""Cartridge???" Powder in, ball in, press, grease. WHAT Cartridge?"

That's why I put the word cartridge in inverted commas...the "wrap" allows you to pre measure the powder charge, so the ball and charge can go in in one operation.

Just remember not to moisten the gum on the fag paper on your tongue, you can get low blood pressure very rapidly.

"Meanwhile back on planet Earth, This"

Probably too much effort for today's gangsta...

"I wonder who these clowns are tooled up with their military class weapons to fight anyway?"

"Hey! If youre going to end up doing time, at LEAST do it with street cred!"

If you told your cellmate you were in for piracy, though, they'd think you meant films...

I was once party to a little gun test by a respected museum of arms and armour. An old flintlock was prepped, but with just 75% of a full charge of powder. Against it was a relatively modern Colt .45 self loading pistol. Both were fired at a piece of mild steel plate. The .45 put a really big dent in it. The old flintlock's ball cut a clean hole straight through it. The good news in respect of street crime, is that if a blagger armed with a flintlock misses, there is probably enough time between re-loads to get an armed police response en route. A second miss would be even better as the cops would be that bit nearer. To paraphrase the closing `shot`from Strictly Come Dancing....keeeep dodging.