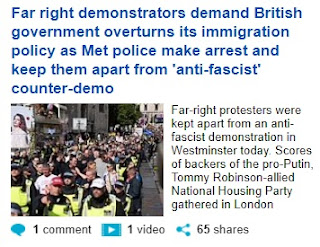 ...but not the other? Why else the use of inverted commas?

Pro-Putin and Tommy Robinson-aligned group 'Patriots for Britain' held an anti-immigration march at Parliament Square from midday. Anti-fascists (known as 'Antifa'), meanwhile, gathered at nearby Marsham Street to protest at the Home Office just yards away.

And now it's reversed!

McGinnis tweeted last week: 'The Globalist banks are dragging us into a war with Russia.' His group, which also has links to Britain First, supports withdrawing from the 1951 Refugee Convention.

Both proposals are violations of the Refugee Convention, the Human Rights Act and the European Convention on Human Rights, which was written in part by Churchill himself.

Again, so what? When that was drawn up, the world was a vastly different place. Why must this remain in aspic, preserved forever, when other legislation is being torn up willy-nilly around the world?

I of course support dumping those laws.

The government could also get real about towing the illegals back to France and flying them to Rwanda, or wherever it was.

There's also the lady who's just seized power in Italy. I'm sure she'd be open to a combined fleet to tow the illegals back to Africa as well.

"I of course support dumping those laws."

Me too. Sadly, I think we have no-one with the backbone to do it.