Yesterday, a 'Daily Mail' story was tweeted out: 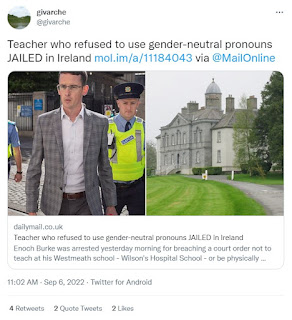 And we were off to the races! It went round the world at the speed of...well, electrons. But people should have heeded the words of Twitter, which before you retweet something in a news story or article, asks you if you want to read it first.

Because he wasn't jailed for that. He was suspended for it (rightly or wrongly), and it was how he took that suspension and what he then did - refusing to stay away from school premises - that got him arrested and jailed. As it would have done anyone.

Frankly, he sounds more than a little unhinged. Not the free speech martyr I want to get behind.

Email ThisBlogThis!Share to TwitterShare to FacebookShare to Pinterest
Labels: choose your battles wisely, freedom of speech, jumping to conclusions

Having done my schooling during an era when silly twats weren't appointed as teachers, I defer to comments from the woken.

Sadly, MTG1, I was. Including a Quaker pacifist who refused to every talk to me as my father was a career soldier, who among other things had walked with his unit from Normandy into Germany, so that I was damned with original sin.

At the same school, but having left before I got there, was a teacher who stole school dinner money. He moved to be headmaster of another school, where he went on to embezzle money, was sent to prison and on his release, topped himself.

The past is a foreign country where they do some things differently, but there are Kundts there too. Incidentally, we never got taught the sound part of the syllabus, perhaps because it required experimentation with Kundt's tube apparatus and the physics teacher perhaps didn't know how to pronounce it?

Whilst I completely agree with the teacher not indulging the delusions of children who think they are something that they are not and fully support him not using the stupid pronouns that deluded troons want him to use, there is as you say much more to this than meets the eye.

Although he was in a difficult position with the school seemingly captured by the gender identity cult he should have fought this pronoun idiocy by other means, maybe through the courts or by other more appropriate protests outside of the school environment. Turning up and sitting in an empty classroom doesn't exactly look like the best or most effective way to fight this one.

I'm with the teacher on the need to stamp on this pronoun bollocks but I can't support him over the way he protested and which led to his imprisonment for contempt of court.

Inevitable that the courts will experience the same degree of contempt presently reserved to plod?

"Having done my schooling during an era when silly twats weren't appointed as teachers..."

Thankfully, me too! Yes, there were eccentrics, as anon at 11.08 testifies. But there seems to be far more of them these days!

"...he should have fought this pronoun idiocy by other means, maybe through the courts or by other more appropriate protests outside of the school environment. Turning up and sitting in an empty classroom doesn't exactly look like the best or most effective way to fight this one."

Indeed! This is a calamity entirely of his own making.