Maybe She Should Have To Live Next Door To The Judge..?

A woman who beat up her neighbours in a "ferocious and unprovoked attack" has been spared jail after pleading guilty to two counts of assault and criminal damage.

'Stony-faced'..? Does that just mean she didn't celebr... 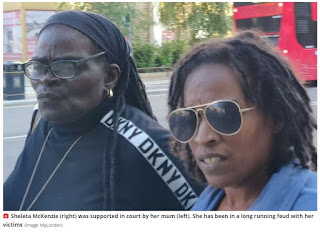 McKenzie had been forced to live in Croydon after she was arrested, as part of bail conditions, but defence lawyer Charles Digby pleaded for her to be allowed back to her home of 23 years rather than be forced out by a restraining order.

One of McKenzie's victims, Helena Perestrello, was inconsolable as she learned her attacker would return to live next door.

McKenzie was slapped with a restraining order (Ed; As well as being beaten with the ugly stick..?) - while staying at home - which means she could be resentenced with jail time if the long-feuding neighbours begin warring again. She was also handed 15 days of rehabilitation and mandatory mental health treatment which she meekly agreed to comply with as the judge demanded a verbal response.

Presumably because one wasn't forthcoming? Such contempt for a court bending over backwards to be lenient to an undeserving cause once again...

She also managed to avoid paying compensation of around £1,000 after the judge deemed it would place her under further financial strain as a mum on benefits of around £1,100 a month, which goes towards rent, bills, student debt and feeding herself and her son.

Why not give her a handful of fivers from the poor box while you're at it?

As, no doubt, were all the taxpayers reading this....

It's that picturesquely diverse demographic again . . .

Another one of Blair's successes.

To be fair, being forced to live in Croydon is quite a punishment.
This story is a murder waiting to happen.
Jaded

And there we were thinking the justice system was there to protect us plebs.

Rise of the governing Black Party...I can almost smell it.

"Another one of Blair's successes."

Indeed! I wonder what she was studying..?

"To be fair, being forced to live in Croydon is quite a punishment."

"Rise of the governing Black Party...I can almost smell it."