…in the animal kingdom, they can be vicious. 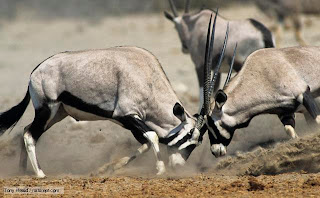 And Man’s an animal, after all:


Andrew Bailey, prosecuting, told Grimsby Crown Court that Mr Yilmaz bought a house on Winthorpe Road and employed youths, including Boulter and his cousin, to help with some work there.

An argument flared about payment and some missing tools. Boulter went round with a youth and told Mr Yilmaz: "You said you were going to pay me in November."

I expect Mr Boulter was keen to get it settled so that he could inform the benefit office of his change in status, yes?


They crowded round him, "got right in his face" and Mr Yilmaz punched out in a pre-emptive strike, hitting the other youth by mistake.

He warned him: "We are going to run you off the Nunny."


They later returned with another man, thought to be the boy's father, and Boulter was holding an aluminium baseball bat. He warned Mr Yilmaz: "You're going tonight."

Mr Yilmaz told him: "I'm not going." Boulter raised the bat and hit him with it four times. He tried to hit the victim on the head but Mr Yilmaz blocked the blow with his arm.

A woman punched and kicked Mr Yilmaz and a group of other troublemakers entered his garden. Boulter was brandishing a metal bar. The other youth and Boulter hurled bricks. The one thrown by Boulter hit Mr Yilmaz, who picked up concrete to defend himself. The vigilantes kicked the door and Mr Yilmaz leaned against the door to stop them getting in. A metal bar was poked through the gaps and a window was smashed.

I guess in man, it's not just the males that fight the battles? The female of the species likes to get her licks in..


Boulter later told police community support officers: "He'd better not be there tonight or I'll make him move out. I swear if you bring him back here, I'll do him over."

He told his accomplices: "Make sure that house gets done because they are taking me in."

And why does he have no fear of punishment from the State for behaving in this manner? Well, because it works!


Mr Yilmaz had since left the area, said Mr Bailey.

And the punishment is, well, pathetic:


Boulter was jailed for a year.

Which means out in six months.
Posted by JuliaM at 09:05

And peace was restored to the neighbourhood........
Goldilocks then chose the porridge that was just right......

I love some of the comments - this one in particular:

So they are travelling Bakers as well as Builders?

It can't be long before we all decide that the best policy is to ring fence the sink estates, no traffic in or out, and just let nature take it's course

Oh no, please, let them in at the very least. I'd happily lay on the buses.

"And peace was restored to the neighbourhood........
Goldilocks then chose the porridge that was just right......"

Indeed! I suspect the place is well known to the local force.

"It can't be long before we all decide that the best policy is to ring fence the sink estates, no traffic in or out, and just let nature take it's course"

"I'd happily lay on the buses."

You'd have to offer combat pay!