Because You're The Real Victim...

A pet owner told a jury how she couldn't breath (sic) after her dog clamped its jaws around another in an attack she described as “awful”.

Leeds Crown Court heard that spaniel Ted was left “with its belly and intestines hanging out”.

Injuries that were unsurvivable. The spaniel's owner, a 16 year old girl who had stopped to ask Breen if she was OK after seeing her slip over, was distraught as she recounted the details in court...


Clare Breen said she was walking Mastiff-Labrador cross Jerry and another dog, Becky, in Lund Park, Keighley, on July 29, 2012, when she said she fell and Becky slipped from her collar.

Breen said: “She (Becky) was bounding about and wanted to play. She was sort of lolloping about a bit sort of around me and wanting me to chase her.”

Defending, Michael Collis asked what was the reaction of Ted’s owner, 16-year-old Lucinda McGrath, who was nearby. “She was making alarming noises. Screaming, but not loudly in terror, but just screaming, screeching and kicking out towards Becky,” Breen said.


Miss McGrath alleges that Becky, a white American Bulldog, bit her hand. Breen said she was tying Jerry to a bin, so she was free to control Becky, when he lunged and bit Ted. She said Jerry was usually a “sofa potato.”

Ah, yes. That old familiar 'He's never done that before!'..


After the attack Breen, who has fostered rescue dogs for seven years, went to find Miss McGrath’s father. “I couldn’t breathe. I couldn’t stop shaking or crying. The whole shock of everything had knocked me sidewards,” said Breen, of Malsis Crescent, Keighley.

Really? Imagine how the 16 year old who'd seen her beloved pet torn apart in front of her felt...

Mrs McInerny said. Under cross-examination Mr Collis said Mrs McInerny could not be sure Breen meant ‘my dogs attacked your dog’, meaning more than one dog, or if she meant ‘dog’s’ as an abbreviation of ‘dog has.’

Breen admitted she told the family she would have both dogs put down, because she wanted to put things right, but yesterday told the court that Becky had done nothing wrong.

Apart from be beyond your control?


She was accused of lying in order to protect Becky, who she had owned for several years longer than Jerry. Prosecuting, Louise Azmi said: “I suggest you’re shifting blame from one dog to another.”

Breen replied: “They’re both my dogs. It’s like having two children and saying you love one more than the other because one’s older and you’ve had it longer.”


She said she took full responsibility for what Jerry had done.

Breen denies being the owner of a dog which caused injury while dangerously out of control. The trial continues.


An American bulldog did not bite a teenage girl’s hand during a dog attack in a park, a jury has ruled.

The night of the attack, Breen sent Jerry back to the rescue home she had got him from five months earlier and Becky stayed with her.

So she failed to have EITHER dog put down, as she promised?


Becky was removed by West Yorkshire Police four days after the attack, the court heard, to test her breed after there were suggestions the dogs may be pit bull terriers. The dogs have not been returned.

Judge Scott Wolstenholme said to the jury: “You’ve got pictures (of the dogs) and they are not pit bulls. This case is not about pit bulls which are dangerous dogs and banned under the Dangerous Dogs Act.”

Breen was found not guilty, but a lesser charge, of being the owner of a dog dangerously out of control in a public place, was put to Breen regarding Jerry’s attack on Ted.

Judge Wolstenholme sat as a District Judge to take the guilty plea. The crime is usually dealt with by magistrates. Breen, of Malsis Crescent, Keighley, will be sentenced for that charge on Monday at Leeds Crown Court.

I hope she dresses for the occasion... 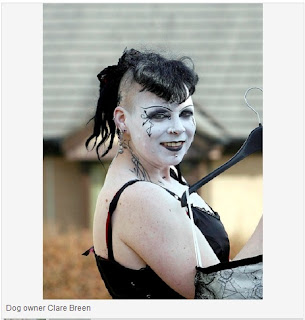 Maybe if she loses, she plans to claim discrimination on 'special victim' grounds?
Posted by JuliaM at 09:10

She looks a rough old dog herself doesn't she?

I think I may be able to offer this lady a position on my special representative / waste kent taxpayers money scheme I'm having a lot of success with at the moment.

Are we to add the Marcel Marceau likey-lookeys to the list of protected minority groups ?