There Should Be Consequences...

...if not for the complainants, then for the CPS officials who overruled the first decision not to prosecute and decided to press ahead, thinking that the tabloid-driven tide of fury wouldn't ever turn against them. 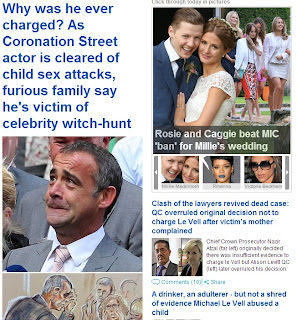 And yes, it's utterly shameless that, having lead the MSM charge, the 'Mail' is now switching horses mid-stream, but let's not quibble, if the potential headlines are all that the CPS pays any mind to, and it seem they are.

And, for all those tempted to go down the 'Ah, but there was new evidence!' route, well:


The alleged victim was interviewed on video by specialist officers trained to deal with such cases and she told them about the abuse and rape in detail.

The girl also returned to the police in March 2012 told them she had forgotten to mention other rapes she had suffered at the hands of the actor.

Looks very much like false memory syndrome. Was she every interviewed by a psychiatrist?

She attended (with her mother I gather) some kind of counselling sessions which deal with 'assisted' or 'recovered' memories or some such Orwellian drivel. She then suddenly decided that she 'remembered' after all.

And yes, she only attended the counselling after her original complaints and after the CPS then ruled there was not enough evidence to proceed.

So, they needed 'more evidence' you see.

"This series of indecent assaults occurred throughout the Summer of 1946, on occasions you hung out the washing. Why wait so long before reporting it to us, Mrs Balwin?"

Mixed views on this one.Well done to Michael Le Vell for being found not guilty.Let's hope he gets on with his life.
However if the CPS are criticised every time a not guilty verdict is reached then no cases will ever reach court.I know from personal experience how many good jobs are dropped by a faceless CPS drone on the end of a phone line or email address.
In theory this is what the jury system is for-hear all the evidence and come to a verdict.Juries are unpredictable and every prosecution is unique.Most come down to one person making the decision.It's not an exact science.
The right to privacy for the accused is another debate.
Jaded

Whilst accepting that no one outside the court has heard all the evidence it seems fair to say that it is time that anonymity for accused is brought in ASAP. The current climate does not ensure a proper investigation or a fair trial. It isn't just celebrity sex allegations though. What ever happened to allegations being investigated PRIOR to arrest? Nowadays it is allegation - arrest - bail for months and months - and thena decision to charge which if applied to any other matter would not have been authorised. the professional and personal fall out is too much to risk.

I am with Jaded on this, but I do feel that there is far more to the story.
When and why the allegations came to light.
The actual relationship between mother daughter and accused. That we will probably never know and if any of us did we could not say.

"...and after the CPS then ruled there was not enough evidence to proceed."

Yet went ahead without any anyway...

"However if the CPS are criticised every time a not guilty verdict is reached then no cases will ever reach court."

True enough, but the issue with this one was why they decided to go ahead after already classing it as unwinnable. Identity politics should never trump that.

"...it seems fair to say that it is time that anonymity for accused is brought in ASAP..."

"That we will probably never know and if any of us did we could not say."

It seems half the Internet knows who she is anyway!