...or the crippling fear and overreaction caused by suspected terror attacks?

Watching this - and the simultaneous event in Dover - unfold on Twitter last night, with the contrast between the instant communication and fevered rumour-slinging of Twitter vs the surprisingly reticent MSM...

...it struck me that we really have more to fear from ourselves than any potential 'foreign man shouting and behaving suspiciously', don't we?

And we are much less inclined to believe officialdom too, which I think is rather healthy: 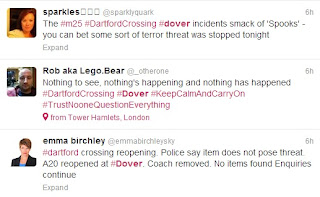 We live in interesting times...
Posted by JuliaM at 09:35

Some nutty polish geezer wasn't it? I should think the police knew it was bollocks very quickly, WTF the crossing had to remain closed for so long is beyond me. They had the 'suspect package' and they had the 'loon' - - -what else is needed?

A personal case-in-point. During the riots of a couple of years ago, somebody reported on social media that Birmingham Children's Hospital was under attack. This was followed-up by various "reports" of windows being smashed and smoke being seen coming from the building. The usual misspelt calls for capital punishment followed.

I happened to be inside the hospital at the time, where a bit of concerned hubbub had started over whether the reports were true or not. Of course, they weren't - the rioters were targetting the police station across the road from the hospital. The hospital had been locked: we may not have been able to get anywhere very quickly, but as long as we stayed put we were relatively safe.

I decided to reply to the thread about the hospital with the truth. Two minutes later, my post disappeared. I tried again. It disappeared again. I then asked why my posts kept being deleted only to be told that "it might not be true." Meanwhile, all of the calls to "ang ver scum" continued to be on plain view.

I've since been more careful as to who I allow to be my friends on Facebook.

"... we had to ensure public safety and as soon as clearance was obtained the road was immediately opened."

Mmmmmm, really? If like EVERY other incident of this type, the safety of the public was probably assured within an hour, two hours maximum! The remaining period of closure was undoubtedly taken up by lots of yellow jacketed jerks sauntering about the place trying to look important. Then there's the photos - gotta have those - maybe some video too. Meanwhile Officer Dibble has arrived back from Toys R Us with some coloured chalks, sketch pads, pencils, Post-it Notes and road marking paint. By now it's gotten dark and there's still a 2km stretch of motorway to dust for prints, media interviews and the News at Ten to do.

Sometimes, I only think they open the roads again because the Chief Super doesn't much fancy driving home the long way around.

The Police can prosecute the public for '' Wasting Police Time '. Pity we can't prosecute them for 'Wasting the Public's Time'.

Oddly enough, I'd read that one that very Friday morning!

"Some nutty polish geezer wasn't it? "

All the papers yesterday would say was 'a foreign national'. They were being very, very cagey about his actual nationality.

Maybe because it wasn't one of a known bombing persuasion, and we might ask questions about their threat assessment skills?

"I've since been more careful as to who I allow to be my friends on Facebook."

I've managed to avoid that particular one entirely! Twitter had a fair few obviously-false rumours going around though..

"If like EVERY other incident of this type, the safety of the public was probably assured within an hour, two hours maximum! "

But there's the overtime, and the opportunities to play with all those shiny toys!

"Pity we can't prosecute them for 'Wasting the Public's Time'."

Questions do need to be asked.