For a start, the desire to block, ban or remove something comes up against the fact that both Facebook and Twitter are deeply imbued with the United States's first amendment and its sense of free speech, which can at times seem like the freedom of a privileged elite to speak, lecture and make jokes.

Clearly, 'Jane Fae' prefers the comforting embrace of the CiF moderation regime, where privileged elites don't get things all their own way. 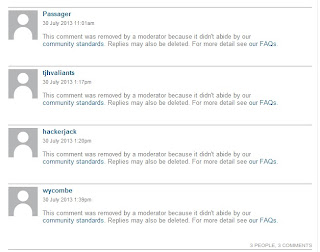 True, it's possible they were all deleted because they threatened to rape the author. But having looked at their profiles and their other comments, and seen the bizarre things you'll get moderated for, I suspect not...


The male-rights activists, the racists, homophobes and bigots have got smart. They know how to insult, wind-up and hurt without overstepping the mark, with the end result that only the worst and most overt "you should be raped" jibes are stopped.

Because those are the only people that will ever be affected by controls. There's no such thing as mission creep in 'Jane Fae's' world.

How do we know they are 'homophobes, racists and bigots'? Well, because the author assumes they must be! And that should be good enough for us, right? It's a near-universal belief in the progressive press that SOMETHING MUST BE DONE!


If the police started to act more consistently in such instances, using the law, as they appear to have done in support of Criado-Perez, the number of cases where intervention was required would quickly reduce – and the DPP's fears of being swamped might turn out to be unfounded.

Yes, well, best of luck in getting consistency out of the police!


Let's focus instead on the law as it is: let's ask the CPS to enforce it, convince it that letting such crime slip past is about as acceptable as ignoring difficult assault cases. By all means, let's have a button – but one that delivers reports of online abuse directly to the local police force, a bit like a security alarm, and not just to Twitter.

Which is, I guess, just what the progressives want.


This relatively simple solution doesn't exist yet but I'm currently coding a mock-up of one for Everyday Victim Blaming (EVB), a not-for-profit organisation set up to help stop violence against women.

Violence against men is, I suppose, perfectly acceptable?

This desire to help women only will strike some as strange, because despite the 'Guardian's' coy statement that 'Jane Fae is a feminist and writer...' it leaves out that part that she wasn't actually born a woman. 'She' is transgender.

There just has to be a psychological reason for this concentration on women's issues, doesn't there?
Posted by JuliaM at 10:55

This will be just like the smoking ban in pubs.

If only we could force those nasty blokes away, we'd have somewhere nice to meet up. So out go the smokers and... we'll, nothing. Those pubs that have remained open are lifeless places that no one wants to visit including those that campaigned for the new regime.

Same with Twitter. Anything and everything not meeting the approval of the entire audience will elicit a push of the button by at least someone. Eventually, the space will be sanitised, safe and... well, boring. Exit those that campaigned for the non-slip, child friendly regime saying that Twitter is dull, has no spark, just full of people talking about their cats.

Why doesn't Twitter launch a 'lite' version of their software? Over 21's only, must register from a verified postal address and all profanity is automatically censored. Users given the option of which version they subscribe to at sign-up.

We all know what will happen - see above comment - but it would give Twitter the perfect defence. The critics could hardly complain then if they joined the full-fat wild west version.

"'Jane Fae is a feminist and writer...' it leaves out that part that she wasn't actually born a woman. 'She' is transgender."

If Jae is a tranny then she *was* born a woman. You probably meant "was born without a vagina". Gender goes far deeper than what dangly bits the Lord saw fit to bless us with.

Having a 'gaping axe wound' between your legs doesn't make you a woman, neither does not being able to reverse park nor having to squat to piss.

Infact Gender goes deeper even than Xs and Ys right down to a cellular level-and no I don't mean the amount of time one spends on her mobile phone.

And before anyone accuses me of being a Guardian reader , I'm about as sexually enlightened as Henry VIII but even I had to admit that my best mate (6ft 4", 12 pts of Snake Bite, Special Forces) was infact a girl...despite her cock being bigger than mine.

"This will be just like the smoking ban in pubs."

Why doesn't Twitter launch a 'lite' version of their software? "

What's most likely to happen is that a rival to Twitter will start to take off.

"Gender goes far deeper than what dangly bits the Lord saw fit to bless us with. "

I know that's the trendy proposition, but other flavours of mental illness to do with body phobias are available, and no-one's suggesting we cut off their limbs or put them on diets. We try to cure them instead.

"Like the feminists don't know how to wind up, hurt, and insult without overstepping the mark?"

They used to. Now they just want all the effort to go into simply removing what they find troublesome.

"I know that's the trendy proposition"

You're too good a writer and too good (ie 'right' IMO) a commentator for that slur on my character to OFFEND me!

As you're normally pretty clued up ...for a bint, I'll put that answer down to PMT, alright, Luv?

No doubt they were as eager to condemn a certain Ms Silverman, who recently expressed a wish to anally probe the Governor of a US state because of his stance on abortion.

After all, not having the biological option of raping him, this was her next best threat option.