...the male looks very similar to the female: 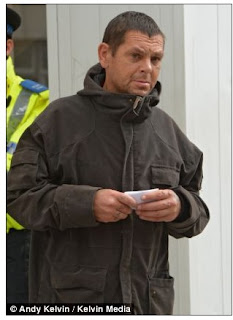 David Savage. You couldn't make it up...

Remember this case? You won't be too surprised to hear it's not his first time at court, will you?


David Savage, who has a previous conviction in 2006 for having a dog out of control, pleaded guilty to owning a dog dangerously out of control in a public place at Halton Magistrates’ Court, Cheshire, today.

And what a shocker!


Savage, who has previously been subject to an Anti-Social Behaviour Order which he breached...

I know, I know, I can tell you're amazed too.


Defending Savage, Gary Heaven said the dog had not shown violent tendencies before the attack.

He said: 'During the period it was in his possession there was no occasion it had displayed any traits whatsoever that suggested it was capable of violence, let alone that level of violence.'

Right. Sure. Because people like Savage don't select a dog for those tendencies?


'The reason he wasn't holding the dog himself is that he suffers from severe back pain.'

Ah. Which prevent him working, I assume?

Gosh! Yet seemingly don't prevent him owning a large, hungry animal and feeding it and himself pretty well?


'He had taken medication that morning and it had caused his hands to tremble quite badly.'

I note the 'medication' isn't named.


'He wanted the dog to get exercise but wasn’t capable of holding the leash.'

Lucky he has some male friends that can...


Magistrates say they will sentence him, and decide on the dog’s future, in a hearing next month. They expressed concern for his lack of remorse and previous conviction for a similar offence.

Why's it going to take them that long?


A destruction order for the Staffordshire Bull Terrier, and a ban on Savage from owning animals will be considered.


Meanwhile, Campbell, also 44, who is charged with having a dangerous dog out of control in public did not appear in court today.

She was arrested yesterday along with Savage, after both defendants failed to show up to an initial court hearing.

And she's now behind bars, one hopes?

This is why we have animals on the streets in nominal control of animals. Because there are no consequences.
Posted by JuliaM at 12:15

Goes to check list of Member States of the United Nations and an Atlas...

Could the dog plead in mitigation that it was unable to control its pets because either the dog or they were on heat?

A destruction order for the Staffordshire Bull Terrier, and a ban on Savage from owning animals will be considered.

How about a destruction order for the owner?

The ban on "savage animals" I believe we already have ... yes?

I still chuckle when I see Halton described as Cheshire, it's only across the Mersey from that other well known den of iniquity - they even talk the same for chrissakes!

Suspended sentence for a sociopathic woman whose pit bull savaged a three-year-old into permanent scarring and disability. Funnily enough, this dog had displayed no previous signs of aggression either.

Come on Savage for a surname, it's inaccurate how about David Useless-Bastard now that would be accurate.

I bet their kids are gorgeous.....
NOT.
Jaded

That your own prove smart is no more likely than their progeny acquiring good looks, WC Jaded.

I think he looks like a jowly mastiff. Was that his dog?

Nice to hear from you again Melvin.
My kids are gorgeous thanks.
Jaded

"Could the dog plead in mitigation that it was unable to control its pets because either the dog or they were on heat?"

"How about a destruction order for the owner?"

Yes! He'll cost us all a lot more over his lifetime.

"Funnily enough, this dog had displayed no previous signs of aggression either."