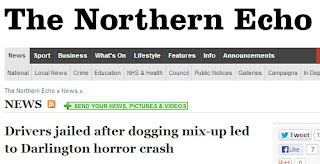 Well, if that's not a headline that just begs 'Read on', I don't know what is...


John Cawston, 64, was crossing the road to his home in Darlington after a Sunday night out when a Citroen Berlingo with Lewis behind the wheel ploughed into him on High Northgate at 11pm.

What led to the high-speed and highly-dangerous chase involving the two men and their white vans was disputed when they appeared at Teesside Crown Court to be sentenced yesterday (Monday, July 29).


Lewis, 51, said he was in fear for his life after being threatened by Berry and a friend at a lay-by notorious for people looking for sex with strangers off the A68 on the outskirts of Darlington.

He says he was lured to another lay-by nearby when Berry flashed his lights - a well-known signal - and fled in terror when the 21-year-old's friend approached him brandishing half a pool cue.

And 'flashing your lights' being a well-known signal  *worried face*

That's it, I'm letting NOBODY out of a side turning any more!


Berry claims he had no idea what the lay-by was often used for, had just been driving about with his pal and girlfriend and was propositioned by the balding maintenance man soon after pulling up.

He told police he was "boiling with anger" because his partner had got upset when the stranger approached their Ford Transit but denied driving off to lure Lewis to another lay-by for a beating.


Berry's teenage friend - who was cautioned for a public order offence for brandishing the pool cue - later told police he knew it was a gay haunt, and said: "I don't like that sort of thing."

I expect Mr Cawston doesn't like being the totally innocent victim in all this much either...
Posted by JuliaM at 09:40