Did The Whole Country Take A Vote, Then? 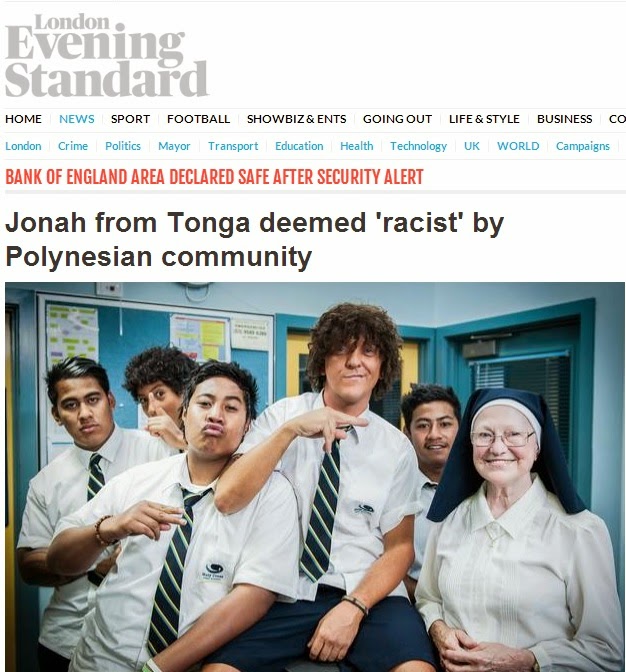 Really? Well, only if by 'Polynesian community', you mean a few social media users and a whole bunch of anonymous Internet users clicking a button:


But the series has upset members of the Polynesian community, sparking social media campaign #MyNameisNOTJonah hitting out against alleged stereotypes of the show.

Instagram user Salote Taukalau posted an image on Instagram holding a poster reading: “I am a proud Tongan. I’ve never been suspended.” “And I’ve never been to prison. And I’m in my final year studying towards my Bachelor Degree.”

In a similar post, Leitu Havea, wrote on Facebook: “'This post is to stand up to the stereotypes of how Pacific Islanders are being perceived as within the TV show #JonahFromTonga.” The post has been liked by more than 600 people, with people praising the teenager for standing up for Polynesian people.

And that now translates to 'a whole country' being offended? Seriously?

Of course, there are those whose very career depends on being able to articulate outrage:


Professor Helen Lee, head of La Trobe University's department of sociology and anthropology, told Radio Australia’s Pacific beat she was horrified by the show’s portrayal of Pacific youth. She said: “I just think it's dreadful. It's just awful. It's creating a terrible stereotype that's just deeply offensive to Tongans.

Yes, we shouldn't stereotype Polynesians, it's not like they all think and act alike, is it? They are individuals, with...


"The comments to his supposed sister, calling her fatty, talking about sexual matters, swearing in front of her is absolutely taboo in Tongan culture.”