Christ, What’s Smaller Than A Nano-Violin?

The mother of a young British jihadist who fought with Isis in Syria has spoken of her despair at being left without support since his return home – warning that Britain is at risk of Paris-style attacks because of the Government’s failure to rehabilitate extremists now back on these shores.

Yes, it’s the government’s fault these pampered little darlings who run off to Syria thinking it’ll be like a game of ‘CoD’ come back & have nightmares. 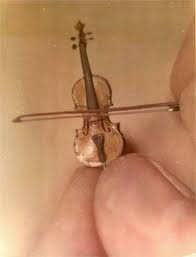 Nope, this is clearly far too big...

Revealing herself on camera for the first time, she says: “There’s no point in us as a society denying the presence of all these people that are coming back because they are coming back and ignoring the problem isn’t going to make it any better. I feel if these people are just left unattended, not helped, not supported, the potential to society could be devastating. They could become a walking time bomb.”


When asked if James deserves any sympathy, she insists that he poses no danger to British society…

So, there’s no issue then?


Linda adds: “My son’s mildly autistic and that made him extra vulnerable. ”

Well, the next official size do is pico, but I still think that might be a bit on the large side,

Why are we letting them come back again?

Why are we letting them come?

Fixed it for you.

You could carve a stringed instrument from a single planck.

She's right... We shouldn't be ignoring these people.

We should be arresting them and trying them for treason - for acts of war carried out under an enemy flag.

Why prison? One round back of the head, job done. Why should the tax payer fund this?

Jihadis go off to get themselves killed: he couldn't even do that. Keep him out of the gene pool. Organ donor?

Whilst Bunny's suggestion has some merit ...

I think that his entire family (and fellow mosque attendees, friends and neighbours) should be stripped of citizenship and deported.

Oh, I know you get rebellious teenagers doing things a parent/mentor doesn't agree with but how many of those actually disagree with (if not actually support and encourage) such 'choices'?

It's only when it affects, and costs, them that they will be forced to take action to (if the progressive lie of them actually disagreeing and being 'moderate' law-abiding citizens is true) 'police their own'.

Your son wants to commit treason or be a terrorist and you don't act to stop him (or at least report him)? You're as guilty, an accessory at the very least.

I could barely see the screen through my tears.

"Why are we letting them come back again?"

I wish I knew.

"It's only when it affects, and costs, them that they will be forced to take action to (if the progressive lie of them actually disagreeing and being 'moderate' law-abiding citizens is true) 'police their own'."