David Conn thinks the next one is sure to work: 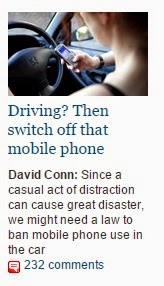 Don't we already have one? Yes. Yes, we do. It's against the law to use a mobile phone while driving,

But because someone flouted that law, SOMETHING MUST BE DONE!


The terrible consequences make me wonder if we are heading towards a ban on drivers having their phones turned on in the car at all.

Because that will definitely work. No-one will flout that one, will they?


Twitter use has convinced me social media is addictive, specifically the desire to check responses to something we’ve posted, seeking the rush of approval, reassurance or argument. I see it in my daughters when they’re awaiting Instagram likes, and the constant chat is why Facebook never sleeps. All of which means we habitually reach for our phones in the slightest moments of pause – and that extends to driving, when withdrawal symptoms can kick in.

Ahhh, that 'Guardian' Royal We again. Now, no-one loves Twitter more than me, but have I ever felt the need to look at my phone while driving? No. Not even before it was against the law.

Because I'm not stupid. Because I know it's a distraction. Because I'm well aware of the responsibility not to let myself be distracted.


To be able to cause disaster from so casual an act of distraction suggests that before long we might need a law to prevent us having phones turned on in the car, rather than one which severely punishes people who have succumbed to using them.

And when someone flouts that law (because they will, sure as eggs is eggs), what then, David?
Posted by JuliaM at 12:10

Yet another Guardian piece to which the only sane response is: Oh do fuck off.

I find a bluetooth headset might make you look a prat but is invaluable when travelling. It allows me to answer calls while on the move which is about all I use a mobile phone for (never have seen the need to fiddle with a phone to send a message when I can do that much easier from my large tablet or laptop as an e-mail).

Typical Grauniad: I am / they are doing something wrong, but it's not my/their fault, it's society and thus we all need to be whipped harder by the state.

I am a driver with the N.H.S.
It has been our rule (not law) to keep our mobile phones switched off while driving. That includes the phone which our colleagues need to call us on in order to tell us what/who needs to be taken where and when. Some of them are bright enough to text us our next job, but some still insist on phoning, then get all upset when we don't answer.
So...we have a choice. Either obey the rule which means that we can't do our job, or do our job and break the rule.
I have noticed that the difference between a daft and unworkable rule and a law is usually just time. As always the rules/laws are created to cope with irresponsible maniacs, and the rest of us are caught up in the mess.

I don't have a problem as I don't own a mobile phone. What is the modern distraction with being constantly in contact? Turn the buggers off and read a book.

Or Julia's blog on the phone.

"Yet another Guardian piece to which the only sane response is: Oh do fuck off."

"I find a bluetooth headset might make you look a prat ..."

And causes passers-by to play the 'Bluetooth conversation or nutter talking to invisible friend?' game....

"So...we have a choice. Either obey the rule which means that we can't do our job, or do our job and break the rule."

If talking is so distracting, how do cops with radios in-car manage?

"What is the modern distraction with being constantly in contact?"