There’s a chill in the air, the usual coughs and colds have started to make the rounds, the scarves are out and the idea of salad for lunch is a long-distant memory. Celebrate all ye lovers of the warming and fulfilling lunch: it’s full-blown soup season.

Mmmm, soup! And a 'Guardian' article surely free of controversy?


Chicken soup is one of the obvious infusions for the peely-wally. “It’s so good,” says Ogus. “Growing up in a Jewish family, your grandmother’s and your mother’s chicken soup was this mysterious wonderful thing. We love it, although we don’t know why it’s so good.” The secret to good chicken soup is fiercely guarded, and everyone has their own version. Traditionally, it’s a fixture starting Friday night’s dinner in Jewish households. “It has a smell that gives me a hit of nostalgia and makes me feel instantly comforted,” says Ogus. There’s more to it than nostalgia, though. Broths made from bones are a good source of amino acids. “You boil off the impurities to make something delicious, and there’s something satisfying about making things out of bones and gristle.”

Someone more churlish than me might ask where all the classic British soups are, like Scotch broth, pea and ham, cockaleekie, etc.

But that would be wrong! This is an article mercifully free of such... 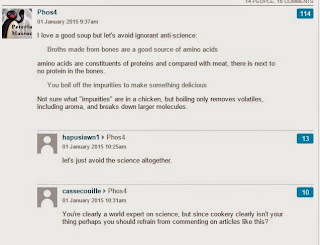 Scientists! What have they ever done for us?
Posted by JuliaM at 09:35

I had salad for lunch yesterday