I've never seen a Landseer piece I didn't like, even the ubiquitous 'Monarch Of The Glen' or the overblown pomposity of 'Man Proposes, God Disposes'. And I can't walk or drive past Trafalgar Square without glancing at Nelson's Column and those lions.

But my favourite is this one, entitled 'The Random Shot': 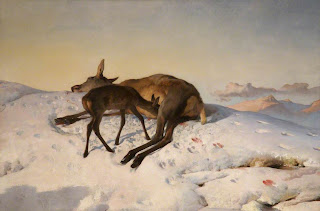 It's not the cutesy-poo painting of a dog and child that made him the darling of the Victorians, is it? No wonder that Prince Albert, who commissioned the painting, allegedly found it too painful to live with!

It's the modern affectation to sneer at this type of work, of course, but I rather doubt that, when one of the darlings of the modern art world shuffles off this mortal coil, he will get a funeral the like of Landseer's, where 'shops and houses lowered their blinds and large crowds lined the streets to watch his funeral cortege pass'...

It helps that, as Richard Dormant noted in 'The Telegraph', "Landseer's art gets up a lot of people's noses".

Oddly enough, just after I'd finished compiling my little list (but long before I'd got around to writing the post) this very image featured on the BBC's 'The One Show' 5 minute art piece, on 21st Feb and is still at their 'Your Paintings' website.
Posted by JuliaM at 13:30

Well I for one really enjoyed modern art 'in action' last night on Mary Portas' prog about that dump Margate. It was incredible to see the processes involved, the sheer imagination and finally the execution of our Tracey's contribution. Asked if she could produce something to help re-launch Billy's new shop she produced an A3 peice of card from her folder with the words, written in her supposedly iconic handwriting....wait for it...
"Come to Margate for a Dirty Weekend". Cue fawning, squeals of delight - I wonder what Mr O'Keefe really fort!

It is thanks to Landseer that we have a name to describe our black and white Newfoundland dogs.

I wish people would sneer more - it keeps the prices down. Then, when I win the lottery, I'm going to snip the lot of them and have a private gallery of the best. Mwhahahahahah.

Unlike Tracy's junk - which so (predictably) delighted Mary Portas - Landseer's work is actual art. By "art" I mean a work which creates a reaction in the viewer which bypasses the conscious senses. However, I don't include the feelings of disgust provoked by Emin's vacuous work as such a reaction. Rather, disgust is a conscious, healthy and appropriate response to the stream of dogsh*t thrown in the public's face by the taxpayer-funded bien pensant enablers of contemporary "art" (step forward Nicholas Serota) of which Emin's oeuvre is a conspicuous example.

I like all Landseer's work although this is not a favourite of mine. A highly talented artist and a bit of a wag...who might have suspected his depiction was also enough to bring a Royal patron down.

"It is thanks to Landseer that we have a name to describe our black and white Newfoundland dogs."

"I wish people would sneer more - it keeps the prices down."

Let them fork out for pickled sharks instead!

"By "art" I mean a work which creates a reaction in the viewer which bypasses the conscious senses. However, I don't include the feelings of disgust provoked by Emin's vacuous work as such a reaction."