...in fact, as oddly as one of those supermarket trolleys that never goes quite where you want it to...


Kate Wiggett was rushed to hospital with serious injuries on Wednesday evening after falling from the A449 Worcester Road bridge over the railway line near Malvern Link railway station.

Victoria Dickinson is charged under the Suicide Act 1961 with intentionally committing an act assisting the attempted suicide of another, namely pushing Miss Wiggett from the bridge.


Dickinson was remanded in custody until February 18 next year, although the next hearing could be heard earlier for procedural reasons.

Procedural reasons like dumping the bizarre charge and going for a more common one.


A woman who pushed her friend off a railway bridge at the Malvern Link railway station has pleaded guilty to attempted murder.

Prosecutor from West Midlands Crown Prosecution Service, said: “Victoria Dickinson’s actions that evening in November were both callous and deliberate. She was fully aware that the victim was vulnerable and upset and was looking for help, but instead of seeking out care and assistance for her she instead tried to assist in killing her.

“The victim survived the fall, but she sustained multiple injuries. It was only the quick thinking and bravery of members of the public who ran to her aide (sic) and pulled her off the railway tracks as a train approached that saved her life.

“Rather than call for help, the defendant then fled the scene. She would be later arrested at her home.

“Dickinson took advantage of a victim who was crying out for help, but instead of helping her, she pushed her off a railway bridge.”

Yes, drink had been taken. What's even more puzzling is that Ms Dickinson was seven months pregnant at the time of the offence, and already has five children: 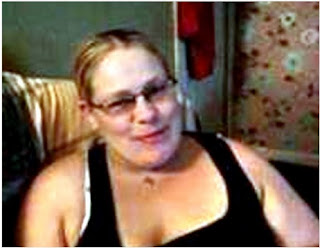 Dickson, who appeared at at Nottingham Crown Court, will be sentenced next month.

I'm expecting the Pussy Pass to put in an appearance as a result...

I'm presuming the sprogs are the result of artificial insemination.

With a VERY long turkey baster!