Beware The Wrath Of The Pensioners!

An 85-year-old woman who was threatened with police at a Croydon Council meeting has spoken out about the upsetting experience.

“When the councillors voted to approve the flats I stood up and said ‘excuse me I am the 85-year-old lady that lives there’ and when Toni Letts said ‘sit down madam’, I said ‘no I won’t, because I have no-one to speak for me so I am going to say my piece’.

“I think I got angry when she said ‘I am getting angry now’.

Of course it's your home. It's never going to be Toni's, is it?


On Tuesday (October 1) Paul wrote to complain to the council on behalf of his mother and says that since then he has been told the incident would be referred to the council’s ethics committee.

I expect the commentariat is rather unsympathetic, as they often tend to be. 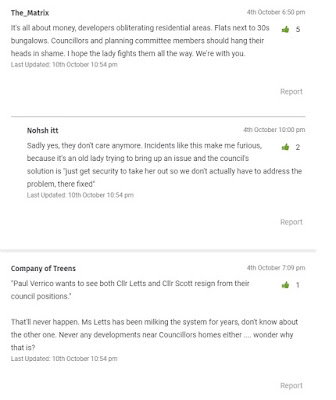 Still, could be worse!

This could get interesting!
Posted by JuliaM at 09:00

Email ThisBlogThis!Share to TwitterShare to FacebookShare to Pinterest
Labels: housing 'crisis', local councils, mad as hell and not going to take it any more

Demolishing a bungalow to build a block of flats is going to cause a great deal of use of unwanted energy. Just think of all that diesel powered plant involved, plus the air pollution by brick dust and dirt. I wonder if this lady has considered contacting Extinction Rebellion, or suggesting the other bungalow may have asbestos in it and should therefore be treated ad a mini Chernobyl type no go area? Anything to cause the council problems over this matter gets my approval, especially as some taxpayer funded research group suggests more bungalows should he built. The problem with that, though, is that you can't get as many illegal immigrants in a bungalow as you can in a block of flats.
Pendeivat

"I wonder if this lady has considered contacting Extinction Rebellion..."