A man was found with a gas-powered gun, cannabis and £9,000 cash in bags after he was spotted getting into a car by police.

Jamie Cunningham was seen getting into a Vauxhall Astra after leaving a house belonging to a 'Mr Holden' in Blackburn that drugs officers were keeping a close eye on.

She said: "The main thing that keeps him going is his four-year-old daughter, she lives in Ireland, she spends time with him in the holidays.

"He does not go out much or see many people, he lives fairly isolated existence." 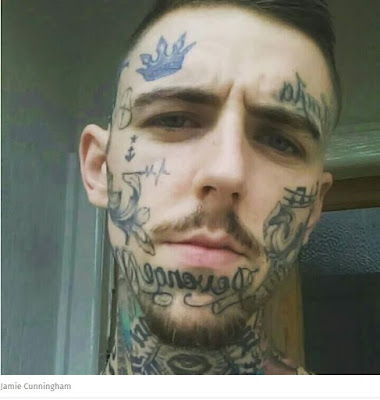 Ah! Clearly, the one person he does see a lot of is the local tattooist!

Recorder Killeen said: "You took the bag away for him (Mr Holden), intending to make sure any police did not get it.

"There was no evidence of drug texting on your phone, no evidence to say you were dealing.

"I have taken the view that there is significant mitigation and a serious prospect of rehabilitation."

Email ThisBlogThis!Share to TwitterShare to FacebookShare to Pinterest
Labels: a likely story, excuses, just throw away the key

The IQ of the average criminal.......very low...he is now on the radar of every policeman in his local area looking like that.
Jaded

Another kid with a father that's involved with drugs. He shouldn't be allowed to be a father at all. Playing the mental health issue again. I expect he's too unwell to work for a living yet he's well enough to dabble in the drug world. Bang him up.

There really are some persons who both deserve and require euthanasia, this 'thing' is one of them. Drugs, violence and procreation without responsibility. End him.

I looked for the single tattoo on his face that reads "I am a twat", but couldn't find it. However, the sum total of the facial tattoos more or less says it anyway.

Some years ago, a colleague carried a small wallet while on holiday in Spain. Of course, it was nicked from a buttoned up pocket while he was at a bus stop. Inside the wallet were a few Euro notes and a greasy piece of paper with, "This paper has been impregnated with a chemical which is absorbed through the skin, will enter your central nervous system, and cause anxiety, sleeplessness, and eventually paranoia. If you have touched this paper, it is because you have stolen it. To obtain the antidote, phone (the number of an old PAYG phone he takes on holiday)."
When he reported the theft, he was able to give the Guardia Civil several phone numbers of calls and texts he received. Although he never heard anything back, he says he would like to think he caused some concern to the thief/thieves.

Sorry, wrong topic. It was meant for comments regarding your theft.

That picture has been bugging me ever since you posted it. I've met countless idiots in the natural course of my longish life but I just can't get my head around the level of utter stupidity that would be required to have random crap tattooed all over your face?

They don't need to be smart, since they are protected from the consequences of their actions by the benevolent State...

"He shouldn't be allowed to be a father at all. "

"Although he never heard anything back, he says he would like to think he caused some concern to the thief/thieves."

"...but I just can't get my head around the level of utter stupidity that would be required to have random crap tattooed all over your face?"

He's unemployable as a result. And we are paying taxes to ensure he doesn't starve in a gutter.

I'm not so sure HE'S the stupid one.