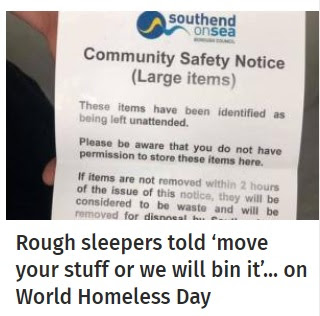 On the day designated to draw attention to the needs of homeless people and ways those in need of help can be supported locally Southend Council left notes on belongings giving a deadline for them to be moved or they would be thrown out.

Because of another of the plethora of 'named days' that plague us now, all normal action should stop?


Zoey Smith, 35, co-founder of One Love Soup Kitchen in Southend said: “I think what the council is doing is disgusting and makes me so angry.”


“These people need help and support.

“Two hours is not long enough for people to move their items and is completely inappropriate.”

So offer them space to put their stuff in your soup kitchen, Zoe.


“I know last year we had reports the council was removing tents and we made a fuss and the council started treating homeless people better.

“Our volunteers are also very angry about what has happened.”

Not as angry as shoppers who now have to sidestep even more of these drunk & drug-addicted parasites that seem to infest every square mile of Southend, thanks to do-gooders like you and HARP...


A spokesman for Southend Council said: “It is probably most important to stress that we work very hard to prevent people from becoming homeless in the first instance, and once homeless do all we can to provide accommodation.

“Unattended items being left in public areas has been an issue for the borough for some time and needed addressing, for a number of reasons, including safety and security.

“We keep smaller items, including bags and personal belongings for 72 hours, giving the owners time to collect them. We unfortunately cannot store larger items.”

Over to you then, Zoe, and your army of volunteers. Let's see you doing something useful, for once.
Posted by JuliaM at 09:00