Surely You Already Know The Answer..? 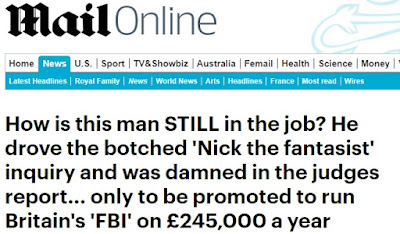 It's because his boss got away with killing an innocent Brazilian electrician and was promoted to the highest rank possible.

After that, anything goes in the thoroughly discredited Met, clearly...


In 2016, retired High Court judge Sir Richard Henriques produced an excoriating report on the failings of the inquiry in general, but vital sections (43 in all), including the shortcomings of individual detectives, were redacted.

Yesterday, the largely uncensored version was published, and it could not have been more critical of former DAC Rodhouse – of his judgment, of his decision-making and of his professionalism, which ultimately resulted in £2.5million of public money – and 16 months – being spent on the say-so of a single ‘source’, the now convicted fantasist Carl Beech, aka Nick.

He's the fall guy, and deservedly so, but the rest of his team hardly cover themselves in glory:


One crucial lead was a ‘corroborating’ witness called Fred. ‘The DAC,’ said Sir Richard, ‘reiterated the need to explore all options regarding Fred.’ Yet data that could have established his whereabouts and identity was never examined.

‘This is a classic demonstration,’ said the judge, ‘of the difference between investigating and believing an allegation.’

It turned out after Operation Midland was closed in 2016 without any arrests that Fred was Nick using another email address.

Basic investigative policy thrown overboard due to the prevailing climate at the time. So why isn't some criticism falling on those who spread the policy of always believing the victim?

People like Kier Starmer and Alison Saunders, who steamrollered this policy through, ensured it spread throughout all branches of our so-called 'justice system' and who never faced any consequences either.

They are just as culpable. As are the politicians that saw them into their roles and never uttered a peep. I'm looking at you, Cameron and May.
Posted by JuliaM at 09:30

The prevailing climate then was to "believe the victim"..this is appalling. Police should question everything and everyone...people lie all the time. I'm not sure who forced the police to believe the victim, but I have a feeling it was either Bernie HH or the worst PM/Home sec in British history. This is what happens...
I hope Harvey Proctor and the other real victims end up with justice. But we know nothing will happen to this senior officer, they look after their own. I bet a less senior detective will be thrown to the wolves.

Come on down MTG, we are all waiting...unless you are related to Carl Beech of course. Two fantasists together.

If Plod had not tried to cover it up there would still have been some grief.
Cressida Dick could have said, in 2017, "There has been wrong doing and I am going to do this, that, whatever to sort it out" but she chickened out....

As Richard Nixon discovered, it's not the doing wrong that does the damage, it's the cover-up.

Very accurate Nemises....same with Hillsborough and other cock ups..."we did wrong,we're not perfect" but unfortunately senior officers cover up and pass the blame. They can't help it.
Jaded

The worst have infiltrated an already corrupt plod, to commit despicable crimes and a disarmed public looks on helplessly. Most of the uniformed dross lack the basic intelligence required to effectively cover up their own stinking merde.

"I'm not sure who forced the police to believe the victim..."

It wasn't one person. It was a perfect storm of political correctness, virtue signalling and moral cowardice by everyone involved...

"As Richard Nixon discovered, it's not the doing wrong that does the damage, it's the cover-up."