He's either dead or alive, depending on whether you open Gwent Police files or not!


A police force which wrongly assumed the prime suspect in one of Britain’s greatest political scandals was dead has made the same blunder again.

But they faced embarrassment when The Mail on Sunday discovered Newton, 72, living under an alias in Surrey. Detectives were forced to admit their error and rushed to the house, only to find he had vanished. 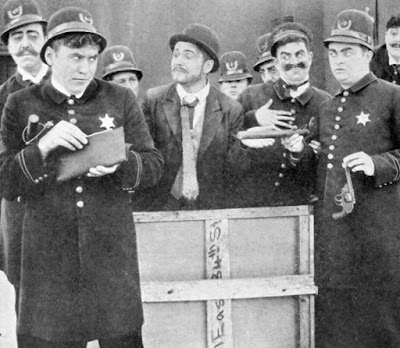 Gwent Police hot on the trail...

OOps! Still, they are keen to 'learn lessons' in these instances, aren't they?

Now, in response to a formal complaint from a former Cabinet Minister about their ‘inept’ handling of the case, police have repeated their astonishing mistake.

After a six-month probe, Gwent’s Professional Standards Department rejected the complaint, saying in a letter: ‘Many key individuals are now deceased, including Andrew Newton.’

But laughing off the claim, Newton’s former girlfriend Patsy Frankham insisted yesterday: ‘He is alive and well.’

And last night, Mr Scott, 79, said: ‘How can I have any confidence that this investigation has been taken seriously? It’s as though justice is some kind of game.’

If it is a game, Gwent Police are playing without any dice or a board...
Posted by JuliaM at 11:00

Gwent police are also playing this game without a brain.

Perhaps life expectancy in Gwent is lower than elsewhere in the UK, and Gwent plod extrapolated the likelihood of the suspect being dead on that basis.

Most plod are both dead and alive at the same time. Schrödinger would be forced to concede that there is nothing different going on inside the Gwent police box to make its occupants unique.

The coppers are playing the long game - keep telling people he's dead until he really, incontroveribly is, in 2040 or so.

Would be funny if Andrew Newton got a telegram from the reigning Monarch though..

"Gwent police are also playing this game without a brain."

"Would be funny if Andrew Newton got a telegram from the reigning Monarch though."