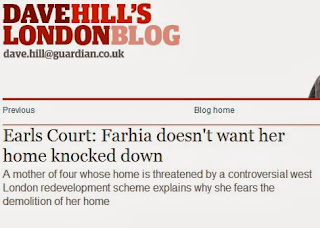 And who is Farhia? Is she a property owner who faces compulsory purchase to build a vanity project like HS2, perhaps?

Well, no. Of course not! When would someone like that ever draw the attention, not to mention the sympathy, of a ‘Guardian’ columnist?


Farhia settled in north Fulham in 1999 after fleeing Somalia's civil war. Seeking asylum, she was granted indefinite leave to stay in Britain.

Just the sort of person a ‘Guardian’ columnist would fawn over!


Farhia's part of the estate is earmarked for Phase Two of the demolition schedule, which could be several years off if it occurs at all. But her need for stability and security is a recurring theme. With the help of an interpreter, a fellow estate resident, Farhia explained to me that she likes the area, values the friends she has nearby, and is happy with the local schools her four sons attend.

She’s been here eleven years and she can’t speak English? Goodness, she really values her roots in Fulham, doesn’t she?


What about the council's insistence that the redevelopment will generate thousands of new jobs, opening up avenues of prosperity for all residents, including the up and coming young? Such improvements would be welcome, Farhia thinks. But why do they require knocking down her home?

It’s not, though, is it? Her home is in Somalia…


Elderly tenants of Tonbridge House, a sheltered housing block in Penge Road, South Norwood, learned last week their homes had been targeted to help tackle the borough's housing crisis and reduce the number of families in bed-and-breakfast accommodation.

Yes, you read that right – the council wants to decant pensioners to house the ‘homeless’. Probably more people like Farhia…


William Ramsey, 80, who has lived there 14 years, said: "To try to remove these people from their own homes, I strongly feel it is an infringement of our human rights. Surely you are allowed to take the last few years of your life with a bit of peace?"

Donald Donaldson, 82, said: "I don't want to move. I have lived here for 18 years and I love living here. I feel we are being bullied."

But no-one’s listening, William & Donald. There’ll be no searing ‘Guardian’ exposes of your plight.

You’re just too….well, unsympathetic, I suppose.
Posted by JuliaM at 12:10

Spot on Julia - as ever.

A 20 yo girl I work with has been telling me about her mother. The mother is 53 and is on a waiting list for both knees to be replaced. Apart from living in a council house and child support, the mother has taken little from the state and has worked all her life.

Her condition now means that she finds it very hard to wake at 2.00am (sic) to start her industrial cleaning job at 3.00am. To be clear, she can wake but finds the walk (no car) to work and back very painful.

After months of nagging, my young friend has eventually persuaded her mum to approach the authorities for temporary help to tide things over.

The response was not exactly largesse.

You cannot imagine how angry I get reading about somebody who has contributed nothing to this society and gets it all. And then moans.

I know! Why don't we deport all the foreigners? Housing shortage would then become a thing of the past.

"The response was not exactly largesse."

"Housing shortage would then become a thing of the past."

I remember an estate agent musing to me once on just where were all these people 'needing housing'? Were they all living with parents?

Or were they not even in the country yet..