"Kuurus, of the Caste of Assassins, crouched on the crest of the small hill, leaning with both hands on the shaft of his spear, looking down into the shallow valley, waiting. He would not yet be welcome.
In the distance he could see the white walls, and some of the towers of the city of Ko-ro-ba, which was being rebuilt."
I can’t quite recall where I bought this, but I do remember where I was when I read it – on a family holiday to Castleton (home of the famous Blue John stone, which is rather appropriate, given how the series later developed! Very blue indeed…). 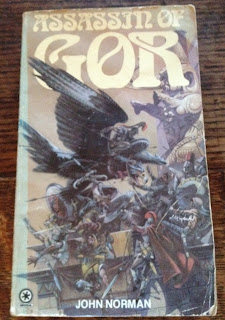 Poor old John Norman (the nom de plume of Dr. John Lange, a professor of philosophy and a classical scholar) got a bad rep for the rather racier (some might say seedier) aspects of his derivative sci-fi sword n' sandals potboilers.
And in truth, when you get past book 6, they degenerate into a little bit of sci-fi adventure sandwiched between a whole lot of smut, and at Book 19, you're struggling to find any plot advancement whatsoever. They've generated a sordid little subcult that occasionally comes to the attention of the mass media with predictably hilarious - not to mention pathetic - results.
But...those first few books are actually pretty damn good.
It was the cover that drew me, drawn by Chris Achilleos, though the paperback edition I hold gives no art credit. There's just so much happening in it! Who is this man riding the giant bird, attacking this army? What sort of sci-fi world is this?
And despite being book 5, it was actually pretty easy to get into, and (if you could fight your way through the aggrieved feminists) would make a damned good film, being absolutely packed full of spectacle, intrigue and plot twists, all of which seemed to be what non-fantasy lovers enjoyed so much in the televised adaptation of 'Game Of Thrones', after all.. The climactic, nail-biting tarn race alone cries out for a proper CGI treatment!
Sadly for poor old Norman, two abortive attempts at filming his works were made and it's probably best to forget all about them.
But, on a dreary rainy day, when the equivalent of literary popcorn is required, why not take a trip to Counter Earth?
Just pack a broad mind... ;)
Posted by JuliaM at 13:30

Oh, gosh. I have two of these, bought in my teens on the strength of the beautiful covers and the girls thereupon. I dug them out a few years ago with the intention of doing a spoof in my humble naughty comic strip, but found them pretty much unreadable and I don't have any "feel" for the whole BDSM thing anyway, so abandoned everything but the vague "slave girls" idea and turned it into a mixture of reality-show parody and hamfisted parable about slavery (the "slave girl camp" turned out to be a reality TV show). I think the ones I have are from later in the series where it's all about Norman's opinion that women want to be slaves, and not much other plot.

Jolly nice covers though. I love all the fantasy art of that period (i.e. my youth) with Frazetta of course being the King, just as Jack Kirby was the king of superhero comics. I also spent a lot of my youth dismally failing to illustrate spaceships as well as Chris Foss did, with his trademark checkerboard paint jobs.

In art terms, a golden age and no mistake.

I seem to remember in one of mine, the reluctant slave girl (who by the end has inevitably come to love being a slave girl) has thick ankles.She keeps saying her ankles are too thick, and so does everyone else. It's never been a make or break thing for me, ankles, but I got the impression that they're a very big deal on Gor.

I've only read one of the Gor books - the one where a pair of jugged spooks get to mix it and the psychic fall out sets off an orgiastic chain reaction or epic proportions.

It's a teenage fan-boy wank fantasy in fancy undress so I gave it to my brother because he's the biggest wanker I know.

I remember reading this book as a kid I dont remember a thing about the plot but i definately remember the cover art,very striking image.
I liked it too so I read some more of of his stuff and came to the conclusion that this guy really really hated women,or wanted to be one,i could never decide.

The 'Assassins of May' not worth a read?

"Assassin of Gor is maybe the best of them all..."

It's certainly the most 'cinematic'!

"...bought in my teens on the strength of the beautiful covers and the girls thereupon."

The covers were indeed excellent! But only here. The US ones were awful!

As you've an interest in illustration, I wondered if you'd seen this story ?

"It's a teenage fan-boy wank fantasy in fancy undress..."

"...and came to the conclusion that this guy really really hated women,or wanted to be one,i could never decide."

Think I'd rather sit down and watch something nice and clean on TV. So, anyone tell me what this Game Of Thrones thing is about?

Hadn't seen that particular story but as you're probably aware I'm keeping a keen eye on the general censorship trends over the past few years.

Ironically, one of the reasons I haven't posted much at Cats is that much of what I want to post about is stuff like that which I have feared may embarrass my fellow bloggers for risking associating the blog with apaprently defending paedophiles, etc, so I've kept quiet. Lot of good that consideration turns out to have done me, heh.

"So, anyone tell me what this Game Of Thrones thing is about?"

They were indeed, very much so!

"Ironically, one of the reasons I haven't posted much at Cats is that much of what I want to post about is stuff like that which I have feared may embarrass my fellow bloggers for risking associating the blog with apaprently defending paedophiles, etc..."

Oh, I think you might get a few drive-by idiots who don't understand, but the regular commentariat would completely understand. I'd hope so, anyway!

Anyone remember "Fafyrd and the Grey Mouser" by (I think)L.Sprague-Carter? Those novels were swords'n'sorcery noire: very clever but also a rollicking good read. Worth seeing if they're still out there.