Yeah, There’s A Lot Of That Despair Going Around, Love… 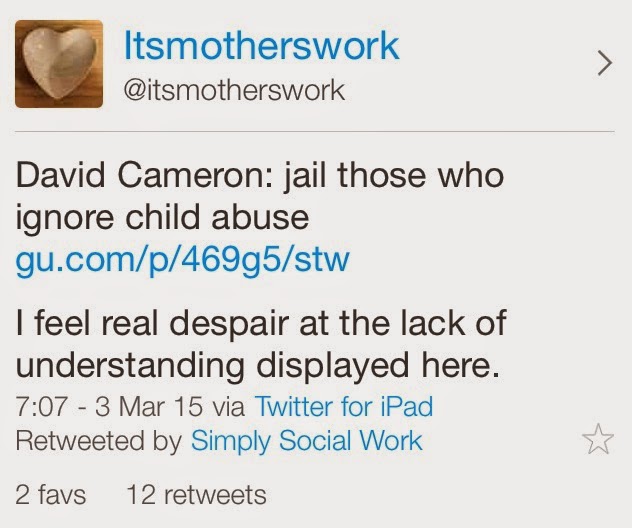 In a number of cases, officials successfully argued there was no need to hold a probe into a child being seriously injured by a violent parent if they later recovered from their injuries.

And Cameron’s right, for once (and I don’t say that often), such people should be charged with whatever we can charge them with under current law, and if that’s not sufficient, then new laws need drafting:


The Prime Minister wants to extend an offence of “wilful neglect” to cover public servants and elected officials who fail to act on warnings of child abuse.

Edward Timpson, the children’s minister, said the findings were “disturbing” .

The expected chorus from the usual suspects – “Oh, this will be unfair & everyone will now be ultra cautious and we’ll get too many referrals! ” – can be safely ignored. They had their chance to do it right. They blew it.

It’s not as if the ones that do make it to a report stage are good enough, either:


When reports were carried out, bad ones outnumbered the good. Many were packed with “irrelevant detail, jargon and acronyms which make it difficult to discern the key events in the narrative,” the panel found.

Tell me again how our public sector employees are only here to help improve our lot in life..?
Posted by JuliaM at 12:05

Take the Yew Tree money tree and use it to prosecute negligent public servants eg mid Staffs, Rochester, to encourage those in similar positions on the public teat.

I might get shot down in flames, but I wonder if we are not getting carried away a bit.
On the one hand, we have criminals. On the other hand, we have politicians in Westminster transferring blame downwards as fast as they can.
Who are the piggies in the middle?
NB, I am not saying that local authorities were not negligent.
The proposed laws could be very dangerous if they resort to generalisations. Teachers especially could be put under and obligation fraught with difficulties. If Little Johnie turns up at school with a black eye (having injured himself), will a full-scale investigation be required?

There must be a reason to take these publicly funded parasites to court.

Far too many weedy subjective individuals have dreamed their way through their 'jobs', all to the detriment of the poor souls needing someone to help them.

So many children have been let down by these pullovered twonks, with their silly ideas, and strung up by the mindless bureaucracy in councils, full of rather thick nobodies.

These corrupt Councils include the same type of steaming Leftie who gleefully condemned the Catholic Church over the so-called 'paedophile priests' scandal...

...which now looks like a storm in a tea-cup compared to Rotherham and Oxford and many more places yet to come.

But it's always different, isn't it, when their Bearded Savage friends are involved.

Kick off the duvet, luv, time to get up and do something.

Public sector employees improving our lot? They exist only to collect revenue and share it out amongst themselves. Any spare time is used for box ticking and arse covering.

"...our public sector employees are only here to help improve our lot in life..

Nearly right:-
"...our public sector employees are only here to help improve their lot in life.."

There. Fixed it for you

And so it goes on. Responsibility? The word will be obsolete in a few years no doubt.

"Take the Yew Tree money tree and use it to prosecute negligent public servants.."

"...but I wonder if we are not getting carried away a bit."

The ultimate responsibility will always lie with the criminal, I agree.

But they are paid to do a job, and they manifestly fail.

"But it's always different, isn't it, when their Bearded Savage friends are involved."

"Responsibility? The word will be obsolete in a few years no doubt."