There Goes The Neighbourhood...

A change in the law from May 2013 by the government means a shop is allowed to change into a restaurant for two years without having to tell the local authority about the plans.

What could go wrong? 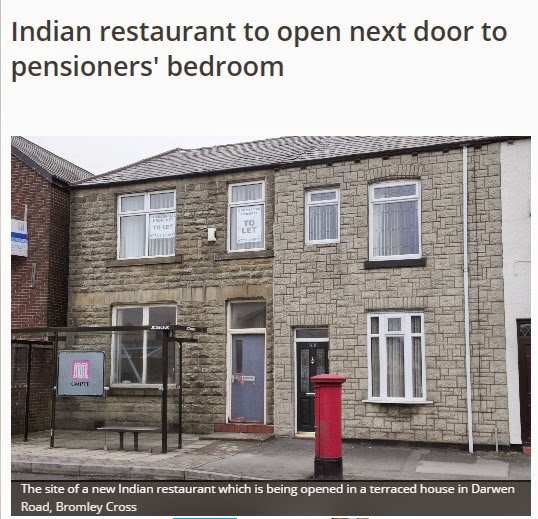 Pensioners Roy and Margaret Greenhalgh told councillors on Wednesday that they now face customers outside their home late at night when the Shimla Indian Restaurant opens in 510 Darwen Road.

The restaurant will have enough room for 30 customers— including a 20-space dining room on the first floor right next to the Greenhalghs’ bedroom.


The situation emerged during a hearing at Bolton Town Hall, where the owners of the new diner applying for a licence to sell alcohol.

Councillors rejected their bid because they thought it would lead to an increase in public nuisance and noise — but the restaurant will still be able to open without a licence, and work to refurbish the former shop and offices is underway.

And have they taken this on the chin? Reader, they have not...


After two years, which runs out on September 12 2016, the owners of Shimla Indian Restaurant will have to apply for planning permission to stay open as an eatery.

Haruk Mia spoke up for the application at the licensing meeting, and said he and his brother Mohammed, who owns the business, would appeal the decision through the courts — and the restaurant will still open as planned.

He said: “There’s been significant investment in the business and we will deal with all the concerns of residents.

“I just feel that there’s a lot of passion that is not according with statue and regulation.”

*sigh* Expect the racism card to be waved vigorously too.

This reminds me of a proposal I suggested some time ago of replacing planning permission with a requirement to gain the consent of adjacent neighbours (for small properties). Neighbours would be free to request whatever level of compensation they choose for approval. A market going rate would soon develop. No need for the council to make a decision. The process could be simply administrated by the magistrate's court.

You could burn the place down. Err, probably not a great plan as you live above them. But if you are prudent, you could arrange the fire for late Saturday night. Full of owners and the scum of the town. A win, win, situation. Just make sure Aunty Hilda isn't sitting upstairs knitting a teacosy. But at 81 she hasn't got a lot to live for. You, of course, will have the perfect alibi- you fucked off to join ISIS. No one would ever find you because, sensibly, you are wearing a rag, on your head. Arse.

What utter fucking madness. Poor old pensioners? Poor old anybody who lived next door to that and I love a curry me!

Oh... WHAT a fucking give away!

What will they be cooking?

"This reminds me of a proposal I suggested some time ago..."

I think that might be quite a good way forward...

"What will they be cooking?"