…and as it’s a ‘Guardian’ piece on riots by rioter Bryn Phillips, that’s quite something:


You saw it happen on the news and read about it in the papers. Maybe you were told it was brought about by unbridled consumerism, or were fed the convenient deceit by politicians and the media that the disenfranchised poor of our nation were fighting the police and smashing up their neighbourhoods because they wanted a new pair of trainers. But this wasn’t the case.

Yes. Yes, it demonstrably was. Not always trainers, either… 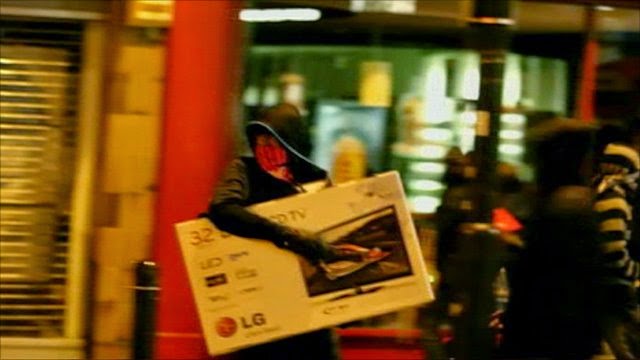 A citizen fights back against the unbridled forces of consumerism by...ummm...

…research published by the University of Oxford has suggested that the riots were actually linked to economic inequality and distrust of the police.

You’d go quite a long way to find someone with more distrust of the police than me, and yet, funnily enough, I wasn’t out there lobbing bricks.

And if ‘economic equality’ was really at the heart of things, why trash their own areas, and further disenfranchise their fellow citizens?


Now the smoke has cleared, we must have an honest discussion about what happened during those depressing summer days.


Rising inequality still scars a land where the poor are left cleaning the corridors of power instead of walking them. Unbridled market forces have cleared great swaths of our cities of the low-paid, breaking up families and communities in the process, leaving youngsters bereft of homes and jobs.


The young people I work with through the church are hungry for justice. They tell me we need to reappraise those dreadful events of 2011, now, before it’s too late. They are willing to show responsibility but they also want power.

Of course they do. And they’ve no idea how to get it, short of demanding it. And nor, it seems, do you…
Posted by JuliaM at 12:15

Email ThisBlogThis!Share to TwitterShare to FacebookShare to Pinterest
Labels: appeasement never works, CiF, underclass, What the hell is wrong with people? riots

On the bollocks scale it is fairly bollocks, not the biggest load of bollocks. The Guardian is bollocks personified.

Every rioter I dealt with was so angry about MP's expenses that they had to steal the biggest TV they could so they could watch the Parliamentary channel in HD.
Jaded

I blame the education system: "an honest discussion" as a description of that piece shows that both "honest" and "discussion" do not apply.

We have indeed, but occasionally one comes along that rises above all the rest...

"I blame the education system: "an honest discussion" as a description of that piece shows that both "honest" and "discussion" do not apply."

The 'Guardian' - it's Opposite Land!