A driver under the influence of alcohol was charged after being stopped by police taking a deer that he had struck with his car to the nearby hospital.

This happened - where else? - in the states.

Lacking a picture of the actual scene for their readership, the 'Mail' photolibrary supplies this: 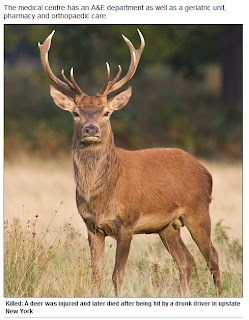 Yup. It's a red deer stag. Not something your average New Yorker is likely to hit in his car.

The stag constructs a very cosy nest by collecting rotting vegetation and lays on the eggs for hours during heavy snowfalls.

We can be thankful it wasn't a picture of a drunken reveller wearing plastic reindeer horns.

The DM staff will be thoroughly well oiled by now.

That's the end of the moose...

And now the weather?

Unusually, the sex of the deer wasn't given! So they had a 50/50 chance on that, at least.

"We can be thankful it wasn't a picture of a drunken reveller wearing plastic reindeer horns."

Not quite, I still have a bit of one in my freezer...