Bandits often lay in wait in the ruins of the old town at the fourways – Jenny Waynest thought there were three of them this morning.

She was not sure any more whether it was magic which told her this, or simply the woodcraftiness and instinct for the presence of danger that anyone developed who had survived to adulthood in the Winterlands. But as she drew rein short of the first broken walls, where she knew she would strill be concealed by the combination of autumn fog and early morning gloom beneath the thicker trees of the forest, she noted automatically that the horse droppings in the sunken clay of the roadbed were fresh, untouched by the frost that edged the leaves around them.


I’m pretty sure I remember buying this paperback on a visit to ‘Forbidden Planet’ in London.

It was the cover that drew me. 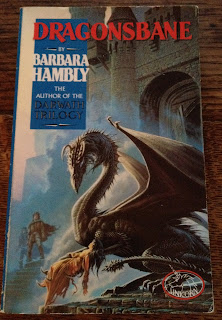 Someone - maybe the artist - said of the cover in an interview that it was the ambiguity that struck you most; is the dragon killing the woman, or saving her?

Because this is not your usual tale of sword and sorcery, or ravaging unthinking beast vs honourable knight. It's far more gritty, and far more realistic of the presumed realities of living with large, carnivorous but majestic and above all, alien creatures, that you might expect.

I'd read other novels of hers before and she wrote three 'sequels' to this one, but they were strangely unsatisfying. Usually, if I like a book, I want to read more, but this I feel should have stopped at just this one. It was perfect as it was.

Fans of 'Game Of Thrones' might want to give it a try - it has the same mix of the fantastic and gritty, dirty reality that has made that series such a smash hit.
Posted by JuliaM at 13:30

Utterly brilliant books, have that very cover(amongst others) on my bookshelf; at one point I had pretty much all her stuff; also did an interesting take on Vampires (immotral Blood)

I've got quite a lot of books with Whelan covers, it's just occurred to me...