You Know When You See A Headline And Expect Quite A Different Story? 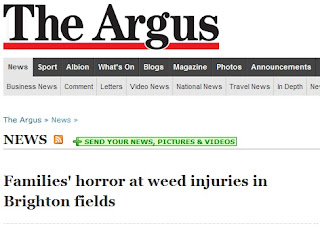 It's giant hogweed, actually.
Posted by JuliaM at 11:55

They are vicious things, even as small plants when they are not so easily identifiable.

And I'm not sure why the council grows those plants: "In the UK, the Wildlife and Countryside Act 1981 makes it an offence to plant or cause giant hogweed to grow in the wild."

"The sap of giant hogweed causes phytophotodermatitis in humans, resulting in blisters, long-lasting scars, and—if it comes in contact with eyes—blindness. These serious reactions are due to the furocoumarin derivatives in the leaves, roots, stems, flowers, and seeds of the plant."

Basically it's the plant edition of the fighting dog :(

Its hardly day of the triffids is it.

Not until it carries off your dog, it isn't!

"Basically it's the plant edition of the fighting dog :("

Every chav garden should have some!

"Not until it carries off your dog, it isn't!"

I think the average Brightonian pitbull is more than a match...