"When the early Jesuit fathers preached to Hurons and Choctaws.."

..."They prayed to be delivered from the vengeance of the squaws.":


Chyane Stephenson-Dielhenn (Ed: chavname alert!), 18, and a 16-year-old girl who cannot be named, held the victim hostage in a care home in Dagenham, Essex, for more than eight hours between 4 March and 5 March 2018.

The 16-year-old victim was forced to swallow her own vomit and snort a mixture of salt and tea. The pair also physically attacked the victim: pouring sugar in her ears, burning her with cigarettes, punching her and tying her up.

The horrific ordeal was filmed by the sadistic duo on Snapchat, with the ‘cruel and sickening attacks’ being shown to the jury at Snaresbrook Crown Court.

Whew! At least this enabled horrified readers to call the poli...


Instead of raising the alarm, recipients of the videos sent suggestions about what the girls should do to their victim next.

Why are they not in the dock too?


Prosecutor James Thacker described it as a ‘wicked and despicable attack’, and revealed the 16-year-old perpetrator had eight previous convictions for crimes including criminal damage, battery, robbery and theft.

Well, of course. But remember, we can't know her name, because she's 'vulnerable'...

Nowhere near long enough. But something's puzzling me - why is a chav from Islington torturing another girl in Dagenham? Still, if she's learned her lesson... 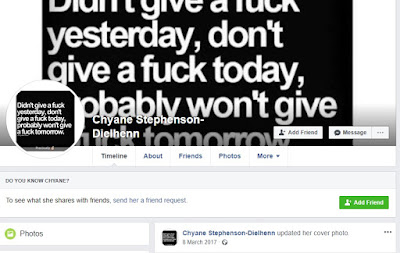 Ah, Chyane. It all becomes clear.

"Ah, Chyane. It all becomes clear."

It's nice of the parents to warn society this way, isn't it?