A Penny For Those Thoughts... 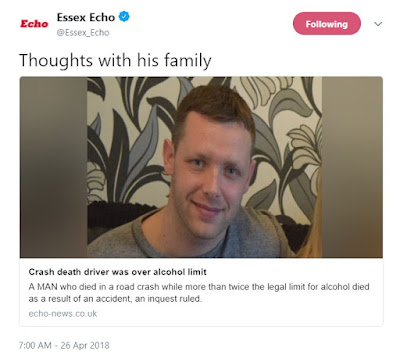 It wasn't just drink, either...


Allan Player, 34, from Thundersley, was driving a black Seat Ibiza when he struck a white Mercedes Sprinter van at about 3am. Mr Player, was treated by paramedics but died at the scene.

Essex Senior Coroner Caroline Beasley-Murray, presiding at Essex Coroners’ Court yesterday heard Mr Player’s car crossed onto the opposite side of the road before crashing with the van.

PC Alan Barlow, from the Essex Police Forensic Collision Unit gave evidence after attending the scene. He said: “Mr Player had 177 milligrams of alcohol per 100ml of blood in his system, while the legal limit is 80, this is twice the legal limit.

And that's not even the end of it!


PC Barlow said: “I went to the scene at about 4.50am and examined the road surface, the conditions and the two vehicles that were involved in the crash.

“Evidence showed Mr Player was driving at about 60mph in a 30mph area and that he lost control of the car before it crashed with the van.

“On the morning of the incident, it was a cold morning and the road surface was wet.”


Mrs Beasley-Murray expressed her condolences to his family and all those who loved him.

Would have been better off thanking providence the selfish chav didn't take any innocent drivers or pedestrians with him.

I think 'the real truth' is pretty self-evident, isn't it?
Posted by JuliaM at 10:30

As my old mother would have said "You shouldn't speak ill of the dead". There are occasions when this might be true, particularly in the case of suicides, but I agree, in this case we should give thanks that no-one else was killed.

They'll have a lower speed limit on that road in no time; that'll sort them out. See Doncaster Road, Conisbrough, for a similar example . . .

It looks as if “English Pensioner” is assuming that this was a case of suicide. I read it differently. It looks to me like this was another drunken idiot who thought he was a better driver than he was. He thought that he could drive with twice the legal blood/alcohol limit at twice the speed limit.

The people of his locality might mourn his passing but their roads are now a bit safer.

"...in this case we should give thanks that no-one else was killed."

"They'll have a lower speed limit on that road in no time; that'll sort them out."

"The people of his locality might mourn his passing but their roads are now a bit safer."

I suspect there's plenty more to take up his slack, sadly...