"What is the future of the country with school kids that behave like this."

We look to London, with all its stabbings and shooting, and we can see that, can't we?


Police in Wimbledon can now forcibly remove kids as old as 16 from the town centre following reports of fighting between "rival" schools.

A school dispersal zone was put into place this afternoon (April 25) due to a "rise in youth violence between children from a collection of local schools."

Hmmmm, I wonder what the demographic is here? I wonder if it's the same one that causes daily havoc on the c2c commute?

How can we find out? Well, we could look at the comments: 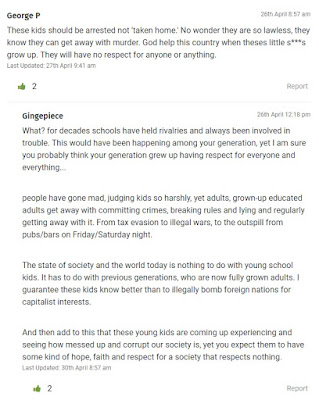 Ah. The fact some bleeding heart SJW has to leap in and start blathering about 'capitalism' and 'foreign wars' tells you a lot of what you need to know. 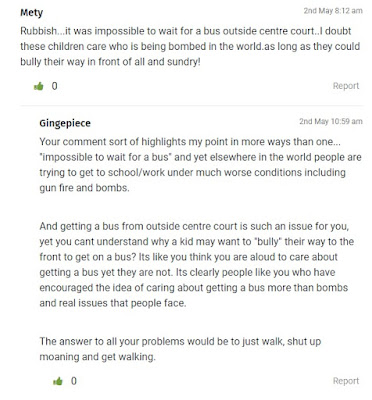 As does the immediate bleating about why the behaviour of these feral animals should be excused...
Posted by JuliaM at 10:30

Christ on a bike.

Socialism. Don't you just love it. Of course that particular SJW probably drives around in a Chelsea tractor, or something similar and never sees the irony.

God help us all.

Love the "aloud" instead of "allowed"!

"Socialism. Don't you just love it."

Well, it does provide a ready stream of material... ;)

"Love the "aloud" instead of "allowed"!"

I see that a lot! I did wonder if some people were using dictation apps. Then I came to my senses, and realised they were just dim.