"It's like banging your head against a wall and this is not a little crime."

Natasha says she contacted West Midlands Police straight after the incident and received a call back the following day.

"Someone rang me and we ended up in an argument as he wasn't bothered about the injuries," she said.

"I'd been attacked by this dog and he was talking about police resources - if this had been a child they might not have survived.

"Then I heard nothing after that and I kept chasing to get updates and then I went to Little Park Street station as it had been over a week.

"I was promised that someone would ring and no phone call came. So I rang them on Friday to ask what's going on and I keep getting passed from pillar to post and that dog is still out on the street."

Funny that they should worry themselves about police resources. They seem to waste enough of them themselves. Sometimes spectacularly.


A spokesman for West Midlands Police said: "We were made aware of a dog attacking another dog and its owner in Radford Road in Coventry just before 9pm on Monday, April 23.

"The attack is believed to have taken place just before 8.30pm that night.

"The 32-year-old woman sustained injuries to her hand and was treated at hospital. Her dog was also injured and required veterinary treatment.

"Enquiries remain on-going and anyone with information is asked to call police on 101, quoting crime reference 20CV/90589W/18." 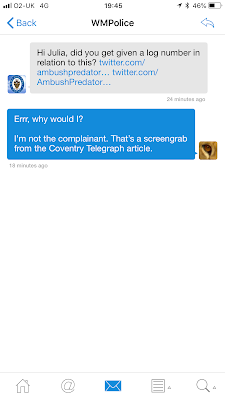 Maybe divert some of the resources you expend on monitoring your Twitter account trying to head off the latest PR disaster on to walking a beat instead?
Posted by JuliaM at 09:00

It's not a hate crime.
Far less risky sitting at a computer in the office.

"Far less risky sitting at a computer in the office."

I wonder if they are the ones that fail the fitness test?