I Didn't Realise The High Cost Of Sweeping Dog Waste Off The Street...

Hooded youths hurled rocks, bottles and eggs at bystanders as a stream of limousines adorned with garish floral arrangements snaked through Kent and south-east London.

One man living near the church where the funeral – thought to have cost up to £100,000 – took place was struck with an egg, and a photographer was punched in the face.

As classy in death as in life. 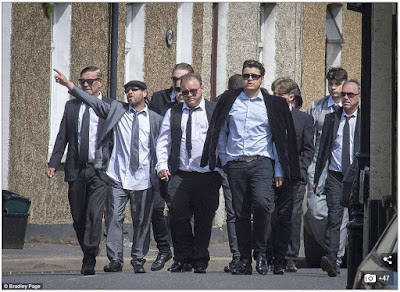 Remake of 'Reservoir Dogs' is not expected to do well...

The heavy police presence at Henry Vincent’s funeral is likely to have cost taxpayers around £15,000.

Still, a small price to pay so that people can walk the streets in safet....


Officers warned residents to avoid walking too close to the entrance of the church for their own safety.

Journalists were told by police their safety could not be guaranteed.

Yes, that's a British Police force pretty much admitting that they are useless in any kind of crisis. I suppose it's nice of them to confirm it officially.
Posted by JuliaM at 09:30

I wonder how long it will before Vincent's grave will be covered in dog sh*t or festooned in "Screwdriver for sale. Nearly new. Only used once. Small blood stain." notices?
Penseivat

What a pleasant individual you are, Penise.

One of the many Metplods who tried to smear and frame the Stephen Lawrence family?

"The heavy police presence at Henry Vincent’s funeral is likely to have cost taxpayers around £15,000."

And the £100,000 cost of the funeral has been paid by the pensioners of SE London and Kent.

There is a time and a place for everything.

That was the time and the place for calling in an A-10.

Salt of the oeuf.

Squires, harsh but not disproportionate.

"Remake of 'Reservoir Dogs' is not expected to do we"

I am now looking into the high cost of removing beer from a keyboard.

"I am now looking into the high cost of removing beer from a keyboard."