Everything That’s Wrong With Today’s Society In One Story

I thought, a while ago, I'd discovered the ne plus ultra of chav names. But MacHeath proves me wrong:


Lurelle Bancroft, 16, had been hailed as a 'role model' by pageant bosses after she made it through to the finals of the Miss Teen Great Britain.

But it was claimed her modelling and strutting on the catwalk took its toll on her school work. Staff at Buile Hill Visual Arts College in Salford, Greater Manchester where she was a year 11 pupil studying GCSEs said she kept missing lessons.

So after receiving several warnings, Lurelle turned up for the lavish end of year ball at the school in her £300 dress only to be turned away in tears after being told she had fallen foul of her school's truancy policy.

But no need to take her word for this - here's some (artistically shot) photos to prove it! 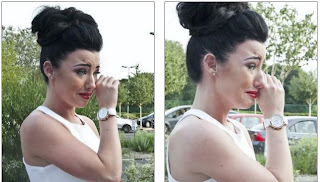 Because if it's not on FaceBook, it didn't happen!

So, is this a lesson in personal responsibility for the preposterously-named teen’s school scrapbook? Why, no. Of course not.


Lurelle who is planning to study media and creative makeup at college said she was left 'traumatised' by the experience of being turned away and her family have accused the school of 'victimisation' and 'discrimination.'

Let that sink in for a bit. And then note mum’s first and immediate response to the suggestion that her offspring might be better off learning a skill that won’t desert her once age and gravity take effect:


Her mother Candice Bancroft, 36, from Swinton, called children’s services in the days leading up to the prom in a bid to overturn the school’s decision - which she said followed months of 'victimisation' after her daughter won the beauty crown.

Doomed, we are. Doomed as a nation. Oh wait! Maybe not!


Organisers have also abolished the role of Carnival Queen this year as it does not ‘fit with the ethos’ of the event.

I never thought I'd say this, but....'Save us, political correctness! You're our only hope!'
Posted by JuliaM at 12:10

So the mum's 36 and the kid's 16.Was she last on the estate to drop one? I'm assuming she hasn't got older kids of course!
I bet "Lurelle"is a minor celebrity in her home town.No publicity is bad publicity after all.
Jaded

I thought you'd pick up on this sad, heartbreaking tale of the modern chavistocracy. The other one was the story of the British 'MOM" who spent a couple of grand on her daughters 'prom' night, dress, spray tan and the hiring of two horse drawn coaches one of which was used by Katie Price at one of ehr wedding. Mum and daughter looked like they'd been to the local garage and had an airline attached to their ankle valves and got pumped up to near popping size.

Apparently the daughter had spent 5 years being bullied and this was her reward for sticking it out - - at least she went to school I suppose.

Dear God - we're fucked - not a pot to piss in and they waste money like this. SHe could have gone on a nice holiday or enrolled at a summer school abroad...bit no - -stupid imported prom nite and all the chav trimmings.

Apologies, but Salford seems either a prime location for a branch of Specsavers, or, a significant number of teenagers are 'aesthetically challenged'.

Style note: they were appallingly ripped off if they paid £300 for that dress. It is a poorly cut and fitted shift with some nylon curtain tacked to the hem. The zip is not properly set in and consequently looks like a spinal injury. It should have cost £80, max, and it could easily have been made better by sticking the same curtain on to the bottom of a lined chain-story version of the base, which would probably have been made better.

I feel very sorry for the girl none the less - her mother is incapable of securing a good frock for her so it was perhaps inevitable that she would not be able to secure a good education either.

I feel sorry for the teachers who turned her away.

Reading the story the family knew well in advance she was not allowed to go, but still trucked her up to the school gates. Hoping I suppose they would relent.

Julia, I should have known that your unerring instinct would already have led you to this one.

WOAR, you beat me to judgement of the dress, especially the quick-release zip; it reminded me of that quote from Dolly Parton, "It takes a lot of money to look this cheap".

The decision to turn up and cause a scene, having taken the precaution of alerting a professional photographer, has Zeitgeist written all over it, even without the call to children's services.

Still, with Max Clifford out of the equation, what's a pushy, appearance-obsessed mother to do?

We have the occasional complaint about not allowing pupils with poor attendance or behaviour records attending the Prom. Personally I avoid the event like the plague despite receiving requests from some pupils. (I have been accused of being cynical for running a draw with categories including "first arrest", "Bling to the nearest Hundredweight", "Best disguised Tag", "Most Concealing Maternity Dress" and "Most Outrageous Arrival"). This little "Drama Queen" had ensured the press were there in advance to witness the "devastation" and "trauma" as her little princess learns that yes, the School really does have rules, and yes, they really, really do apply to you! Regarding the £300 outfit and polyfilla face, yes it was rather a waste of money.

What I find more remarkable is that mother and daughter share the one surname. Is, or at very least was, Candice actually married to the father?

Heavens to Betsy, surely not.

"I thought you'd pick up on this sad, heartbreaking tale of the modern chavistocracy."

The tears were rolling down my face as I typed. Too bad I hadn't thought to hire a photographer!

"Apologies, but Salford seems either a prime location for a branch of Specsavers, or, a significant number of teenagers are 'aesthetically challenged'."

LOL! It is pretty revolting, but I guess that's modern fashion now?

"Style note: they were appallingly ripped off if they paid £300 for that dress. It is a poorly cut and fitted shift with some nylon curtain tacked to the hem."

Glad I'm not the only one to wonder at how that could be considered a 'fashion icon'.

The 'eyeliner laid on with a trowel' look is, sadly, very fashionable this year.

Quite refreshing, in this day and age, no?

"... it reminded me of that quote from Dolly Parton, "It takes a lot of money to look this cheap"."

Oh, indeed! Where has taste and good dress sense gone?

"I have been accused of being cynical for running a draw with categories including "first arrest", "Bling to the nearest Hundredweight", "Best disguised Tag", "Most Concealing Maternity Dress" and "Most Outrageous Arrival"..."

"What I find more remarkable is that mother and daughter share the one surname."

Style note: they were appallingly ripped off if they paid £300 for that dress...

Hey! I used just such an off-the-rack number to polish the van the other day. A perfectly serviceable piece of rag, so don't be so quick to knock it Madam.

I suppose a diver's watch is de rigeur if your planning on going down.

The mother (sic) and daughter could 'almost' be passed of as sisters, which would be flattering on the mother.

I wounder if this a case of a mother realising that her looks are fading and she is trying to live her dreams through her daughter.