Stocky, muscular, hyper-aggressive and with blunt, squared-off jaw and bow-legs... 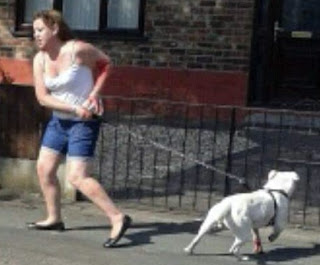 And the dog's fairly typical of the breed too.


Chief Inspector Darren Hebden of Cheshire Police said extra patrols will be in the area to talk to concerned residents and address any issues.

He added: ‘This was a horrendous attack and was clearly very distressing for the owners to witness.

‘I am aware of pictures that have been circulated on social media which will undoubtedly cause concern for the community, but can I reassure people that we have now seized the offending dog so there is no risk to the general public.

‘We will be speaking to the owners in due course and will do all we can to deal with the incident appropriately within the guidelines of the law.’

Interesting choice of words. For one, he seems more concerned that pictures have been circulated on social media, forcing his men to actually do something about this incident rather than brush off the devastated owners with a 'Sorry, but it's not covered by the DDA as it's dog-on-dog' lie.

And for another, as pointed out on Twitter, why the need to say he will act 'within the guidelines of the law'? Shouldn't that be a given?

The comments under the article are depressing, and depressingly familiar. The same old calls for collective punishment in the form of dog licences, or contemporary muzzling, or banning of a particular breed.

But the only breed that really needs to be banned or muzzled or licensed is the ugly, out of control bitch on the other end of the lead...
Posted by JuliaM at 09:15

Email ThisBlogThis!Share to TwitterShare to FacebookShare to Pinterest
Labels: chavs, dangerous dogs, mad as hell and not going to take it any more, police out of control, underclass

Difficult to overstate the community relief arising from mandatory sterilization of all such bitches.

And yes, if the collar fits.

Police and 'issues' - a word now so overused as to render any subject pointless.

"And yes, if the collar fits."

"Police and 'issues' - a word now so overused as to render any subject pointless."

It must be the word du jour, mustn't it?

Another overused 'police word' is AROUND. Often used in tandem with ISSUES. SO their are ISSUES AROUND (e.g.) dangerous dog incidents, racial incidents etc. Issues around, never concerning or about - really aggravates the shit out of me,