” I would hope that common sense will prevail.”


Trevor Cooper, a dog law specialist for Dogs Trust, said: ‘The difficulty for dog owners is in how they can anticipate a child coming in to their garden.

‘What can a dog owner do to prevent it? Put the dog in a cage in the garden or build large fences? That would be unacceptable for us.

‘The Government is going to have to work out a way of not criminalising dog owners if they have done nothing wrong.

‘It's quite difficult for a dog to distinguish between a lawful and unlawful visitor. I would hope that common sense will prevail.

You have to be joking, surely? When has common sense ever prevailed?


David Heath, the agriculture minister, said: ‘We certainly want to deal with the issue of the postman or the political canvasser who gets bitten by a dog out in the yard or garden, where they have perfectly legitimate business.‘‘

The postman, I’ll grant you. The political canvasser? No. Not so much.


‘But we also do not want to penalise the householder whose dog is doing its job of protecting property against an intruder.

‘Getting that balance right is critical. When someone is within a house, it can reasonably be assumed that unless they have been invited in, they must give a strong argument for why they have legitimate business in the house.’

And after they’ve been invited in – like vampires – they are free to do as they please? I think not!


Speaking to the Commons last month Mr Heath added: ‘It is different for a garden, or sometimes even a shed. A child going to pick up a football that has been kicked into a garden should not be set upon by a dangerous dog.

‘They may be an intruder, but they are nevertheless not a burglar or anyone with malicious intent. A public–interest test must be satisfied before a prosecution can be brought. I hope that the guidance to the prosecuting authority will make that distinction clear,' The Daily Telegraph reported.

And remember, a ‘child’ - in the eyes of various conflicting legal definitions - is anyone up to the age of 18. So, just a few months younger than this chap: 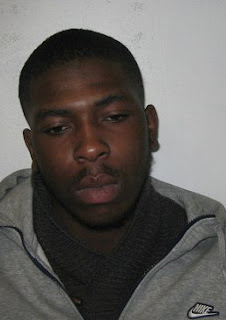 Fancy having him stroll into your garden unchallenged, and able to call the police to declare him a ‘victim’ just looking to retrieve a lost ball?

A child wishing to retrieve a lost football knocks on the door and asks the householder for it back.

Someone has changed the rules. Children aren't required to have basic manners which include respecting boundaries which include other people's property.

I wouldn't have a problem with an intruder on your property being bitten by a dog, even if it was a child looking for a ball, they still shouldn't be there.

If a dog could distinguish between a burglar and a child with no sense of personal property, it probably wouldn't bite the child.

Humans on the other hand, can very easily make that kind of distinction. That's why armed defence is better than big, sometimes uncontrollable dogs.

A shotgun in the hands of an adult would be a lot less indiscriminate than a big arse dog.

A silent home security system alerted me to another 'child of no particular appearance' entering the rear garden in order to 'admire and fondle' the garage door locks....as you do. The infant claimed he was lost whereupon I lost no time 'showing him the way out.'
Don't ya just love happy endings?

"Someone has changed the rules. Children aren't required to have basic manners..."

Nor, it seems, are adults.

"A shotgun in the hands of an adult would be a lot less indiscriminate than a big arse dog."

But relies on me to wield it. And I'm not good with moving targets... ;)

You don't have to be good with moving targets. Hopefully, one look at a 12 guage Mossberg and you target will be moving rapidly off your property.


But I think we need to pause and clarify now: If those are the fields you want to go into, you absolutely should go to college and study incredibly hard. If an architect skips the wrong day to play an ARG, listen to retro grunge pop, start a Libyan revolution, or whatever it is kids these days do for fun and he makes a mistake in his job, my apartment building collapses. If, say, a philosophy major skips the wrong day, he might not know what kind of idealism Kant supports, and that freshman with the pink MacBook won't give him a handjob in the back of her Jetta later..

The paint job is the only other difference. Stopped watching when there was too much family fighting. As far as the building. I not sure why a right to counsel doesn apply in these cases. Yes, I know that child support is a civil http://colliespetcare.co.uk/ matter, not a crminal one, but they can still result in jail time. There is a difference between someone who refuses to pay child support and someone who lacks the financial means to make the payments.

Whoo Hoo, and he gave a speach at a major Islamic Forum in his first 100 day. That has done wonders for us. We are now so much more involved in [url=http://bonanzamotorcycles.co.uk/]payday loans[/url] the political process now that he is [url=http://colliespetcare.co.uk/]pay day loans[/url] president. In April 2005, the FTC and the state of California first sued the defendants, charging that they had used third party affiliates to send spam email. The messages included links to Web sites operated by the defendants and violated the federal Can spam Act and California law. Last year, the FTC requested a court order to put a temporary halt on the operation's spamming and froze the defendants assets..

Turning our focus to the nitrogen business. The nitrogen market did not recover from the impacts of the delayed wet spring and significant competitively price offshore urea supply. We saw lower prices for all products relative to last year when demand in prices were fairly robust in anticipation of record corn plantings and low yields due to the drought, as well as the effects of favorable spring weather.

"Increased ECB income from the India Test series has helped but we've also had donations from members," Siddall told ESPNcricinfo. "We've had a number of anonymous donors and in total we've raised getting on for 200,000 in donations from members which is a remarkable total really. The members have really rallied round to help the club in its time of adversity and I'm very grateful for what they've done..

[url=http://erotikkaset.com/]pay day loans[/url] Some [url=http://madhats.co.uk/]payday loans online[/url] people default on a mortgage because of a sudden financial hardship, while others do so because of lack of financial responsibility. If this is the case they may have issues with responsibility in general, and the house may be in disrepair. Read this article for more information on the risks [url=http://tosspots.co.uk/]payday loans[/url].