A mother who dragged a Gravesend landlady to the floor, kicked the woman’s granddaughter in the face and assaulted two police officers during a night out has avoided jail.


Larisa Wild was with her boyfriend Stephen Coyne and brother Derek Wild when the brawl broke out in the Campbell Arms in Gravesend on June 15.

Alcohol was involved? Well, you shock me.

No doubt she has a good excuse?


The court heard how Larisa Wild, who has a six-year-old daughter, went out for a drink to cheer herself up after being told she would need IVF treatment to have more children.


Sarah Williams, mitigating, said: “She (Larisa) can’t understand how she got into such a state. She can’t remember much.

“Her last recollection was having a drink in the beer garden and next thing she remembers is waking up in the cells.

“She may have had her drink spiked with alcohol or drugs.

“This was completely against her nature.” 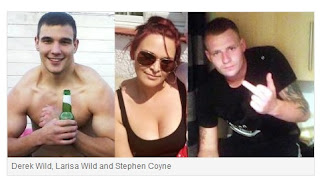 Remember, it's 'not in her nature'.

Thanks to the comment feature, we can immediately put the lie to that particular statement from the defence:


Four people have been jailed after being caught with more than £80,000 of cocaine in north Kent.

Peter Glisson, aged 25, from Strood, was given a five-year sentence after 668g of cocaine was recovered from his van, which was found near Ruffets Wood, Gravesend.

Christian Bennett, aged 20, of Malvina Avenue, Gravesend, got a four-year sentence after 11 wraps of cocaine and £1,200 cash were found in his car in Lower Higham Road, Gravesend.

Phillipa Jackson, aged 22, of Waterdales, Northfleet, received a 15-month sentence and Larisa Wild, of Thalia Court, Gravesend, was sentenced to 12 months after the pair were caught with 775g of cocaine as well as scales, bags and cutting agents.

I don't think this story is real. A brother and sister, living in Gravesend, having the same surname?
Penseivat

"I don't think this story is real. A brother and sister, living in Gravesend, having the same surname?"

Indeed so. Equality? What's that?

Clearly not. Perhaps they've read that benefits to the 3rd child may be phased out?

I love the News Shopper-the comments are hilarious.Hardly judgmental at all...
Jaded